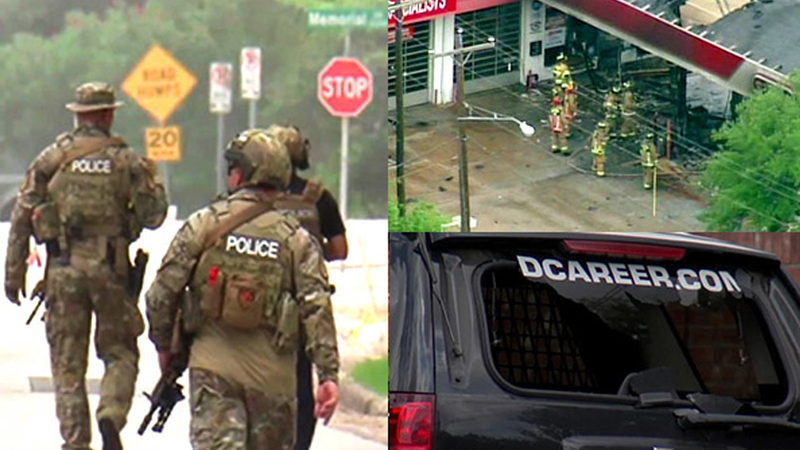 HOUSTON (KTRK) -- A man came into a west Houston auto detail shop and began shooting, killing a man known to be a customer and putting a neighborhood on lockdown Sunday before being killed by a SWAT officer, police said.

It started at the shop in the 13200 block of Memorial Drive at around 10:15am. When an officer responded, the suspect shot at the squad car. A photo posted on Facebook by Houston police after the shooting showed 21 bullet holes. Somehow, the officer wasn't hurt.

A gunman shot two deputies and damaged patrol cars during a rampage on Sunday .

"By the grace of God, he didn't sustain any injuries," said HPD interim chief Martha Montalvo.

More units and a SWAT team were called in and a perimeter was set up around the scene.

"If he hadn't taken that action that quickly, this likely would have been a lot worse than it was," HPD spokesperson John Cannon said.

The customer who was killed is a man in his 50s and a regular at the business. Police say he had just pulled up when the gunman shot him.

Two Precinct 5 deputy constables were also hit. One of the deputy constables was wearing both a metal breastplate and a bulletproof vest, which may have saved his life. The other was shot in the hand. They've both been treated and released.

Three other citizens -- two men and one woman -- were wounded in the shootout. None of their injuries are believed to be life-threatening.

A teen jumped into action to save one of those victims, who had been shot in the thigh.

"I saw a guy on the side of road whose leg was bleeding," said Nicolas Latiolais.

Nicolas wrapped the victim's vest around his leg until paramedics arrived.

According to HPD, the main gunman had a high-powered weapon, believed to be an AR-15. They say he fired at a police helicopter, striking it at least five times. The suspect opened fire on a total of five police vehicles.

Police say it's possible the gunman shot other vehicles during his rampage. They're asking anyone who was in the area and notices bullet holes in their vehicle to contact them.

Fire burned at a gas station next to the auto detailing business. Police say they believe it started when gunfire hit a pump.

Neighbors described hearing many gunshots, and some drivers said their cars had been shot at.

Stephen Dittoe, 55, lives in the house right behind the shooting scene, separated by a fence and tall shrubbery at the end of cul-de-sac.

"I heard the first shot and I thought it was a transformer" exploding, he said. His wife, Ha, 41, said it went on too long for that and described the series of staccato sounds.

She took their two children, ages 6 and 7, into the bathroom, told them to eat breakfast in there, and called 911.

Viewer video of shot being fired in neighborhood

At a church located just a few blocks down the street from the scene of the crime, parishioners sheltered-in-place and rushed to move children in the nursery to safety during morning services.

Parishioners at a nearby church found themselves frighteningly close to the fatal Memorial Drive shootout.

Four lawmen were fired upon. Two were hit. Their injuries are not life-threatening.

"Anytime that you have a situation like this where not only the public -- in this mass amount of shots fired -- the public is threatened, but when you have eight officers on the scene like that, it's just a miracle today we didn't have officers that were hurt," Chief Heap said.

Heap said one deputy constable was taking cover behind a patrol car when a bullet came through both windows and hit him in the chest. His protective vest saved his life.

Another deputy constable was injured when debris from the shooting hit his hand.