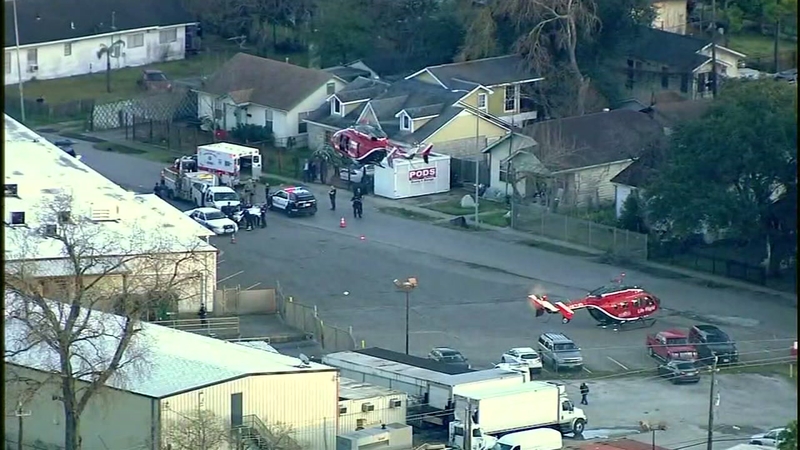 HOUSTON, Texas (KTRK) -- Houston Police Chief Art Acevedo said an officer shot while serving a narcotics warrant at a home has been upgraded from critical to fair condition.

The 54-year-old officer and 32-year veteran of the force was one of four officers shot during the incident Monday at the house at 7800 Harding in southeast Houston.

A fifth officer suffered a knee injury, which required surgery. That officer is projected to be discharged from the hospital soon.

On Thursday, Acevedo gave updates on the investigation.

According to the warrant obtained by ABC13 Eyewitness News, police believed the occupants were selling heroin out of the home, based on a tip from a confidential informant.

"I promise you, we were at the right house," said Acevedo.

Acevedo commented that the investigation is on-going. He said he's aware of "conspiracy theorists" that have speculated that the officers raided the wrong home, but says they are incorrect.

"There's a lot of conspiracy theories out there. People are running rampant. Let me just say this, 'We never run away from the truth,'" said Acevedo.

RELATED: What we know about husband and wife killed in Houston officer-involved shooting

Acevedo confirmed that they didn't find heroin at the residence, but did find cocaine and marijuana. He says an informant had previously bought drugs at the house. The substance was tested and confirmed as heroin.

Acevedo said he has asked Gamaldi to "tone it down."

Gamaldi, speaking this afternoon to Eyewitness News, did not back down.

"I don't see how my comments could impact relationships with anyone because we are talking advocating for our death, using anti-police rhetoric," he said.

"This incites violence against people who wants nothing but peace for the people of Houston. We love our city, too just like they do," said Woods. "We're not bashing the police. We're here trying to rebuild Houston."