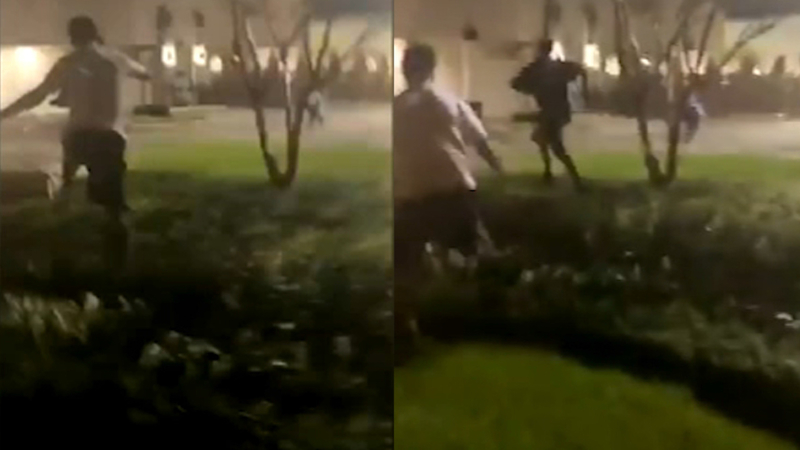 HOUSTON, Texas (KTRK) -- A candidate for Houston's City Council helped chase down a man who had just robbed a convenience store.

Marcel McClinton and three others chased down the man on Memorial near the Beltway after he allegedly stole beer from the store.

"He stole a gun, ran off and then pulled a knife on them while they chased him outside," police dispatchers said during the scary encounter.

McClinton and the others managed to corner the suspect behind bushes until police arrived and arrested the man.

McClinton shared a video of the incident, which shows police pointing a taser at the man and McClinton urging him to listen to the officers.

During the chaotic scene, McClinton kept his followers on Twitter updated every step of the way.

"I'm safe. Suspect in custody. No one was injured. Thank you all for checking in," he wrote on Twitter.

McClinton's campaign office released the following statement:
Last night, Marcel was involved in an incident in West Houston on his way home after leaving a meeting at the Chinese Community Center. He pulled into a Starbucks and quickly noticed an intense situation taking place on the parking lot.He offered his assistance and went up to the suspect trying to calm him down. The suspect quickly pulled out a knife and attempted to stab Marcel in the face. Marcel and others called 911 while forcing the suspect through the parking lot and into the street. He wanted to keep the suspect away from the customers at Starbucks, and in doing so, the suspect lunged at Marcel, the Chevron store clerk, and another civilian multiple times with his knife. They were later able to corner him in hiding until HPD arrived on scene.Marcel, his family, and his campaign team would like to thank the Houston Police Department along with Town and Country Patrol. The officers arrived quickly and were able to place the suspect in custody without incident. Our gratitude also extends to the countless supporters who have offered their love and support. Our sincere thoughts and prayers are with the suspect. We hope he is able to get whatever help he may need during this time.We will still be on the campaign trail today visiting South Park and students at UHD.

The suspect is set to be charged with aggravated assault with a deadly weapon and aggravated robbery, according to the Houston Police Department.