2 Houstonians on mission to help refugees relocated in Poland 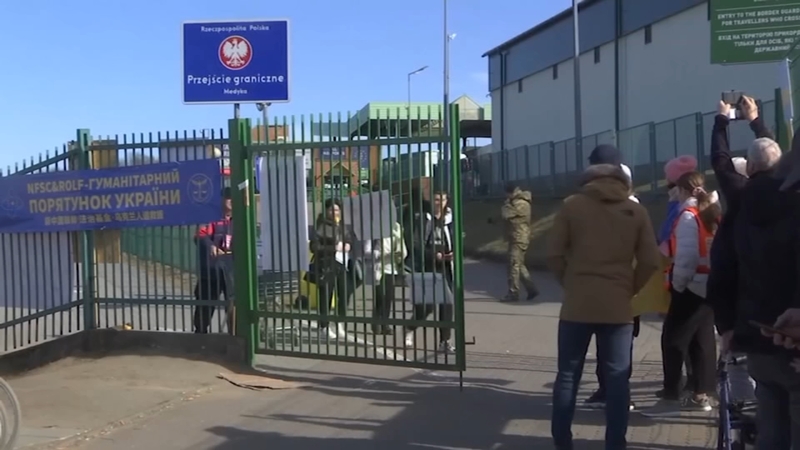 HOUSTON, Texas (KTRK) -- As the crisis continues in Ukraine, the United Nations High Commissioner for Refugees says more than four million people have fled to surrounding countries, trying to get to safety.

People willing to help during this humanitarian crisis are in demand. ABC13 spoke with two Houstonians who felt called to help and sprang into action.

Ralph Fabrizio is in the business of helping. In Houston, he runs sober houses.

Since March 17, he has been on a mission to help people displaced due to the Russian invasion. Fabrizio is currently operating a forklift in a warehouse in Lviv, Ukraine, where donations are coming in by the truckload.

"They need help over here. There are millions of refugees," said Fabrizio.

Fabrizio said Lviv is a city where some people are trying to go for safety, but he still says the warehouse has to be evacuated a few times a day when the air raid sirens go off.

"It's (Lviv) only been hit a couple of times. We got hit Saturday. They shelled a diesel depot about half a mile away from where we're at," said Fabrizio.

Fabrizio said it is devastating to see firsthand what the Ukrainian people are going through.

"The separated families cause anxiety. You've got the men fighting on the lines and you've got the families either in Lviv or on the other side of the border, just the emotional toll of what's going on is something that can't really be captured on a 30-second clip," said Fabrizio.

About four hours away from Lviv in Krakow, Poland, another Houstonian is lending a hand.

"So the last two days, what I've been doing is going back over to those little towns are really just ferrying people around," said Phil Arnett, a commercial real estate broker.

Arnett joked he is serving as a glorified Uber driver. He arrived in Poland on March 25 and rented a 10-passenger van. He is offering rides to refugees who have just made it across the border to Poland from Ukraine. He said he has driven people to other parts of the country so they can meet up with family, to the rail station, or wherever they need to go.

Thanks to a GoFundMe he set up, Arnett has been able to provide these people with food, clothes and other necessities they were forced to leave behind.

"They've been so generous that I handed out a couple of $100 bills to each one of these ladies and they almost collapsed from gratitude. It was really moving. Kind of shook me up," said Arnett.

Arnett said that though he went to give back, he feels he has gained perspective.

"The main thing is just to be thankful for what you have and don't be trying to climb the ladder for something else. Just realize that people all over the world just like you and I are thrust into these situations," said Arnett.