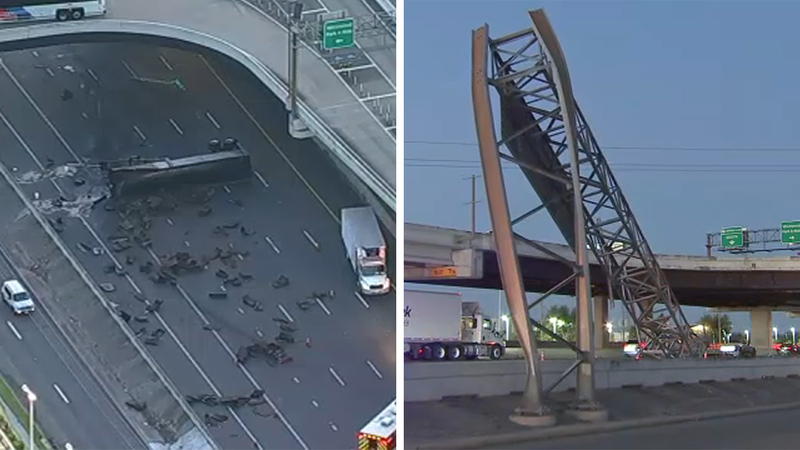 The southbound lanes of the I-69 Southwest Freeway at Bissonnet finally started to reopen after noon, over seven hours after the crash was initially reported.

Crews were letting traffic from the feeder road back onto the mainlanes just past Bissonnet.

ABC13 video at the scene showed a mangled mess at the crash site. It appeared that the dump trailer struck a freeway sign, causing it to fall.

Crews had to remove the damaged sign and inspect the park and ride bridge.

UPDATE: Crews are working to clear the hazmat/ heavy truck incident on I-69 Southwest Freeway southbound at Bissonnet. All mainlanes remain closed. Crews anticipate getting the mainlanes back open in 2-3 hours. pic.twitter.com/54eJyTGMCO

It is believed that the trailer of the truck started rising up on its own. The truck driver tried to slam on the brakes, but couldn't stop the rig.

That's when the trailer rolled over, spilling scrap metal across the freeway.

TxDOT crews at the scene used a torch to cut the sign. ABC13 video showed it fall over in preparation to be hauled away.

Would you look at that! Crews had to take a torch to the sign to get it to completely fall over in an effort to clear the mess from the crash involving an 18-wheeler.