12 total lawsuits to be filed against Watson, lawyer says

On Friday, Tony Buzbee also revealed his firm has been formally contacted by the Houston Police Department over a potential criminal investigation into the NFL quarterback.

However, in a tweet posted Friday afternoon, HPD says it's "unaware" of any contact between the department and Buzbee.

At this time, HPD is unaware of any contact between HPD and Houston attorney Tony Buzbee regarding the allegations contained in his recently filed lawsuits and no incident reports regarding these allegations have been filed in our jurisdiction.

Shortly after HPD published the tweet, Buzbee then issued another response saying, "I guess, technically, they are correct." He then said it was a detective who reached out to him.

"I've made clear that when my clients are ready we will submit a package to the police," he wrote in a caption on Instagram.

Buzbee posted what appeared to be screenshots of a text exchange between him and the detective.

In addition to the 12 total lawsuits, both potential and officially filed, Buzbee said his firm is in contact with 10 more women, all with similar allegations of sexual misconduct and assault. Buzbee alleges one of the assaults occurred this month. Of the seven cases filed, the assaults go back to March of 2020.

"Now we know that in this case, there's a major power differential, you have a star quarterback who is physically and financially powerful verses single moms who work for themselves, mostly from home. One of the parties is famous, known internationally, the other is unknown, marginalized and easy to criticize and minimize," said Tony Buzbee, plaintiff's attorney.

Four separate suits were filed Thursday in Harris County. Two were filed Wednesday and the first was filed on Tuesday. It wasn't immediately clear if others were going to be filed, but Buzbee said this week he's representing nine women with claims against Watson.

Watson is accused by multiple massage therapists of a variety of offenses including civil assault and sexual misconduct. Watson has denied the allegations.

Late Friday afternoon, Rusty Hardin, Watson's attorney, said he and his client will weigh in next week on the allegations. In a statement, Hardin said:

"I'm extremely proud to represent Deshaun Watson and wholly stand behind him against what we believe are meritless allegations. However, we will wait to comment in detail until we've completed our review of the numerous, evolving allegations from Mr. Buzbee. We will respond next week and ask you to keep an open mind until we do so."

The NFL is conducting a separate investigation into the star quarterback, according to a confidential letter released by Buzbee.

"I am writing to let you know that the League has opened an investigation into these allegations and to request the cooperation of your clients in our investigation," special counsel Lisa Friel writes in the letter. 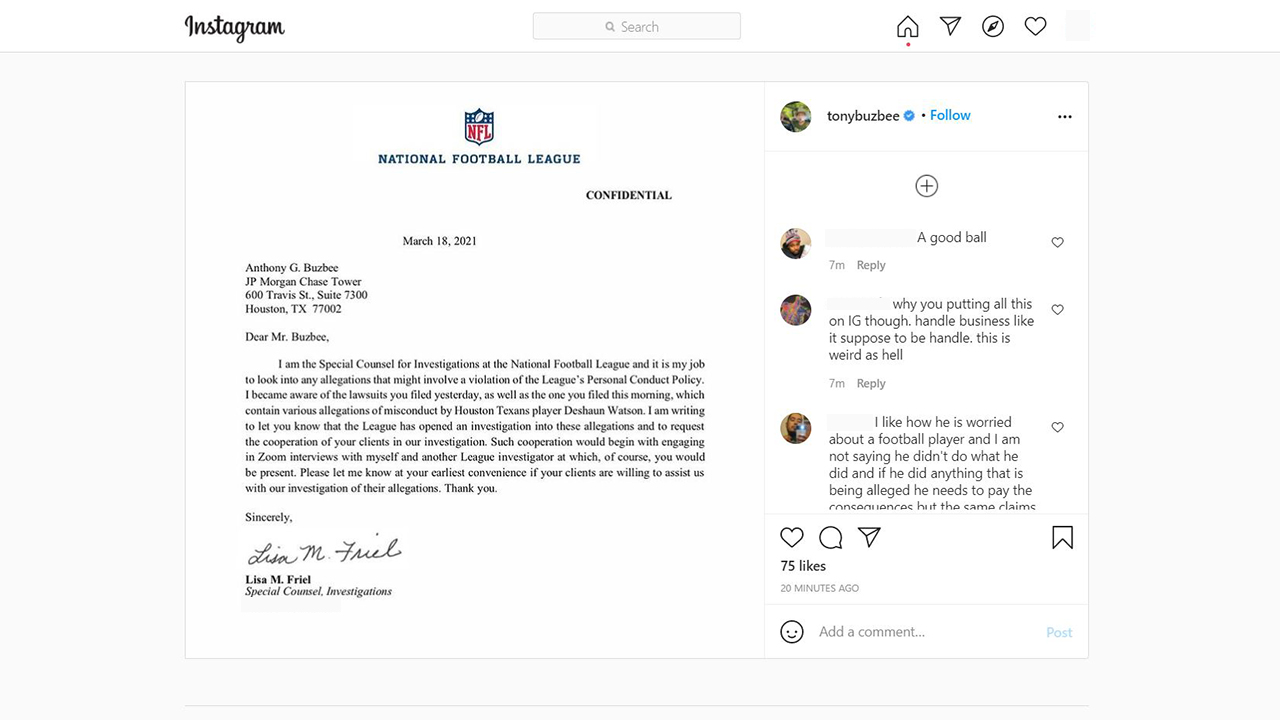 As reported by ESPN's Sarah Barshop, NFL spokesman Brian McCarthy on Thursday said "the matter is under review" of the league's personal conduct policy, and the Texans said they would stay in close contact with the NFL during the league's investigation.

In one of the lawsuits, a massage therapist claims Watson scheduled a session with her at an office building in Houston on the morning of Dec. 28, 2020. The lawsuit claims that the therapist was "terrified" of Watson, due to his much larger body size. She claims that Watson forced her to perform oral sex on him, and that she "blacked out for a few minutes from the fear."

Since the alleged incident, the woman has reportedly suffered from panic attacks, depression and anxiety, and has trouble sleeping.

The lawsuits allege that Watson "committed civil assault" when touching a massage therapist with his penis and that he "intentionally or knowingly caused physical contact with Plaintiff when Watson knew, or should have reasonably known, that Plaintiff would regard such contact as offensive."

RELATED: Deshaun Watson accused by masseuse of exposing himself

The first lawsuit accuses Watson of exposing himself to a massage therapist a year ago. The suit, filed Tuesday in Harris County, claims Watson assaulted the massage therapist during a session at her home in March 2020.

After leaving the room, the massage therapist alleges, she returned to find Watson lying on the massage table with just a small towel covering his groin area.

The lawsuit says the plaintiff "began to feel extremely uncomfortable" and "it became apparent that Watson wanted a massage for only one reason -- sex." It accuses Watson of exposing himself and subsequently touching the woman.

In that lawsuit, the massage therapist alleges that after she asked Watson to leave, the quarterback made a statement that she considered to be a threat. The lawsuit also says Watson later texted her to apologize.

Watson posted a message on his social media platforms on Tuesday, denying the wrongdoing, but has not spoken publicly since the flurry of other suits were filed.

"As a result of a social media post by a publicity-seeking plaintiff's lawyer, I recently became aware of a lawsuit that has apparently been filed against me. I have not yet seen the complaint, but I know this: I have never treated any woman with anything other than the utmost respect. The plaintiff's lawyer claims this isn't about money, but before filing the suit he made a baseless six-figure settlement demand, which I quickly rejected. Unlike him, this isn't about money for me - it's about clearing my name, and I look forward to doing that."

The second lawsuit says, "Watson's behavior is part of a disturbing pattern of preying on vulnerable women."

Watson reportedly reached out to a masseuse based in Georgia through Instagram on Aug. 14, 2020. The suit states Watson sent the masseuse messages on the app, told her exactly what he was looking for and an appointment was made for Aug. 28.

The session was scheduled to take place at the Houstonian Hotel, Club and Spa, where Watson told the woman he had his own suite. The suit states Watson flew the masseuse from Atlanta, Georgia to Houston. During the session, the woman says she became uncomfortable with some of Watson's requests but that she "wanted to give Watson the benefit of the doubt and she needed the business and the money as a single mom of two children."

When the masseuse ignored one of Watson's requests, the suit states he became more aggressive. The woman said she became more and more uncomfortable. She eventually stopped the massage and told Watson she needed to leave.

The woman says she was so disturbed by the incident she did not reach out to Watson to seek the other half of the payment he owed.

A few months after the incident, Watson reportedly reached out to the woman saying he was in Atlanta and asked if she was available, but she did not respond.

According to the lawsuit, the woman is seeking minimal compensation but noted she suffered mental anguish as a result of the NFL star's behavior and is seeking counseling.

The Houston Texans released a statement Wednesday, after the first lawsuit came to light.

"We became aware of a civil lawsuit involving Deshaun Watson through a social media post last night," said Texans director of communications Omar Majzoub. "This is the first time we heard of the matter, and we hope to learn more soon. We take accusations of this nature that involve anyone within the Houston Texans organization seriously. We will await further information before making any additional statements on this incident.