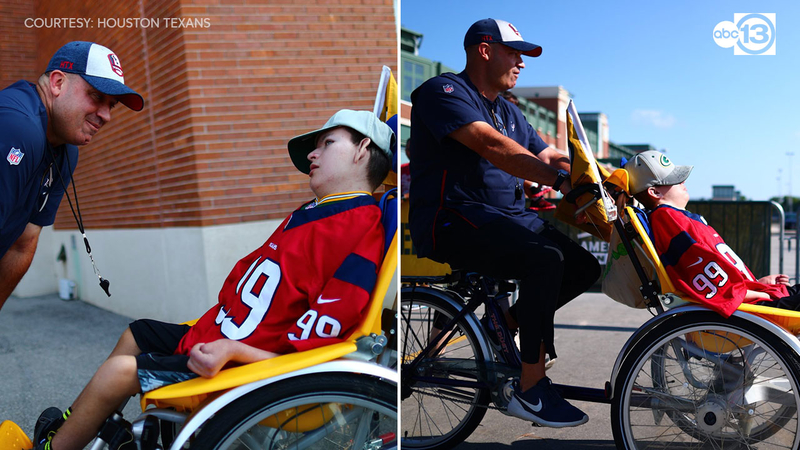 GREEN BAY, Wisconsin (KTRK) -- There was more pedaling to be had outside Lambeau Field for the Houston Texans.

Just like the day before, the Texans players headed to the joint practice field with the Green Bay Packers riding on bicycles belonging to local kids. The team was granted permission to take part in the fan-friendly tradition held by the Packers.

One ride among the dozens by the Texans stood out. Head coach Bill O'Brien got up-close with a young fan named Raymond, who is wheelchair-bound.

In a video captured by the Texans, O'Brien introduced himself to Raymond and told the young man that he reminded him of the coach's own son Jack, who is also a teen with special needs.

"He reminded me a lot of my own son," O'Brien told reporters.

In another video, O'Brien is seen pedaling Raymond's wheelchair-bicycle hybrid. The coach was a little iffy about taking Raymond for a ride, but he was convinced to make the boy's day.

"I was worried that I was going to tip it over...I wanted to do it, but I was like, 'Man, I don't know if this thing is going to' - my balance wasn't great, but it worked out all right," O'Brien said.

O'Brien added that he and the players were very fortunate to take part in a tradition that began in the era of Vince Lombardi.

"This is football history here in Green Bay and we feel fortunate to be able to come up here and practice against these guys," O'Brien said.