After tearing down Ship Channel Bridge over problems, Harris County says this time it'll be safe 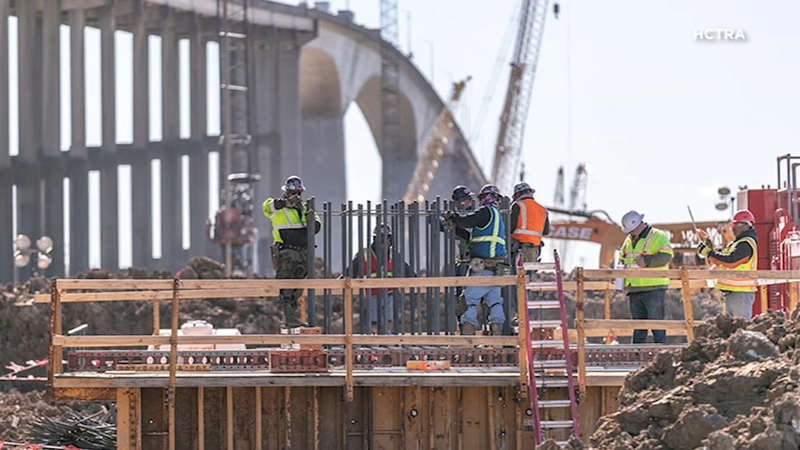 HOUSTON, Texas (KTRK) -- Among the 60,000 vehicles that use the current Ship Channel Bridge daily, Rocky Gonzales often steers his car to the nearby Mom's Kountry Café. Yes, the chicken fried steak is delicious, but the chatter isn't bad either.

These days, the talk turns often to the new Ship Channel Bridge and everything that's gone wrong.

"I think they should have studied it more," said Gonzales, who admits to being skeptical. "And (they should have) looked into it more before they went ahead."

Gonzales wasn't so impressed when the Harris County Toll Road Authority (HCTRA) unveiled its plans for a new bridge a few years back. Even after construction started in 2018, some of his neighbors still weren't sold.

"I won't be driving over the new one until they change it," said Katherine Smith, who told ABC13 she didn't use the current bridge for several years until it opened because she was worried about safety.

The residents have good reasons to be skeptical. Around the same time, the actual Ship Channel Bridge construction began in 2018, a pedestrian bridge in Miami collapsed, killing six people. That bridge's designer was FIGG, a national design firm very prominent in the building of bridges around the country. The Dallas branch of FIGG was contracted for Harris County's bridge.

"I remember the news during my campaign in 2018 that the bridge in Miami collapsed. It was horrible," said County Commissioner Adrian Garcia, who was not in office when the bridge project began.

After he was elected, Garcia became a vocal critic of the bridge design HCTRA brought in outside engineers to re-evaluate everything. In January 2020, construction was paused on the bridge. The pylons along the water's edge remain unfinished to this day. Materials meant for bridge-building stacked up in rows and piles along with the construction site.

The pause, it turns out, would be crucial.

"We went to international experts to validate the design. Regrettably, we found 21 significant findings that indicated the current designs were flawed," said Garcia.

By that time, HCTRA had hired executive director Roberto Trevino. Looking at the project, the largest in the agency's history, Trevino said it was time to go back to the basics.

The redesigned bridge will use traditional steel cables underneath the concrete. FIGG's original plans relied on only pre-cast concrete that would be hoisted into place and fit together like a jigsaw puzzle. It was hailed as new technology, but after the Florida bridge collapse, entities around the country who had contracted with the company began to review the plans. Trevino said in Harris County, it just made sense to go back to what's worked for thousands of bridges around the country.

Overall, the designs of the bridge will not change. The new engineering plan will allow the addition of a bike path, and will be using a technique bridge builders are familiar with.

"We're still going to have a beautiful bridge that the public can be proud of and safe to travel on," said Trevino.

But the pause, redesign, and hiring of a new firm all cost money. Recently, Harris County Commissioners Court approved $300 million to retool the project. Add that to the original price tag, and we're looking at a $1.3 billion dollar project when all eight lanes are completed. Garcia admits it's expensive, but said the alternative could be deadly.

"The decisions I made were difficult. They were tough decisions, but they were made to ensure that generations could use this bridge and it's got structural integrity," he said.

The new schedule means the first four lanes of the bridge won't open until sometime in 2025.

"It won't be done for a long time, I may be dead by then," Katherine Smith said half-joking from her perch at Mom's Kountry Café.

Other diner customers said they're relieved the bridge is getting fixed, but wish it didn't cost so much.