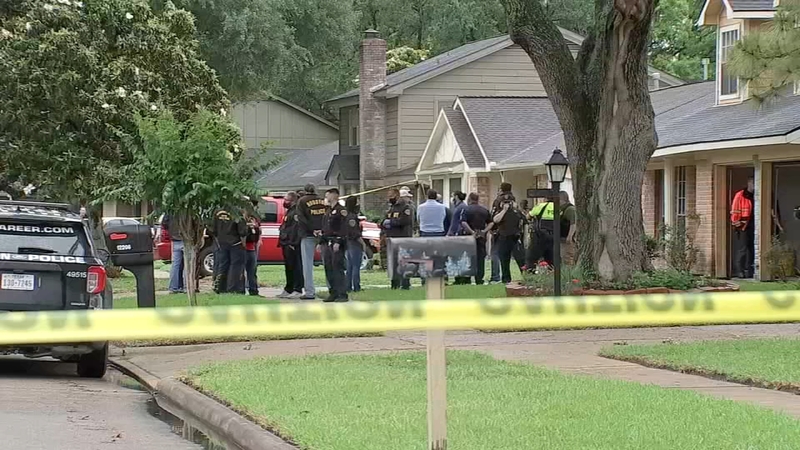 HOUSTON, Texas (KTRK) -- What began as a reported kidnapping in a southwest Houston neighborhood turned out to be something bigger, according to police.

More than 90 people were found huddled inside a modest two-story home on Friday, prompting the Houston Police Department to look into possible human smuggling.

Friday night, Houston Police confirmed to ABC13 that five people found inside the home have tested positive for COVID-19.

Police began administering rapid tests after some of the people informed them that they couldn't smell or taste, signifying virus symptoms.

Is there human smuggling going on in a southwest Houston neighborhood? Police addressed their heavy presence at a home where more than 90 people were found.

According to the police department, the home is located in the 12200 block of Chessington Drive, which is located just off the South Beltway near the Southwest Freeway.

HPD Commanders and PIO at 12200 Chessington Drive after dozens of persons found inside a residence. Incident initially reported as a kidnapping and may possibly involve human smuggling. Media briefing expected in about an hour. #HouNews pic.twitter.com/uNyKoYy00n

Just after 1 p.m., police offered their first statements on what they found.

According to police, they were informed about the location the night before through tips, leading to a search warrant being served this morning.

"Anytime you see people being mistreated, it doesn't matter what race, culture, where you come from ... there's no excuse for people to be mistreated like that," said Asst. HPD Chief Patricia Cantu. "Not being fed, not given the basic, common needs, not being allowed to use bathroom. I didn't want to focus on immigration. I didn't want to focus on legality because that was not the main issue."

There were no children among the dozens of people crowded in the home, with the youngest being in their early 20s. Only five women were among those found. The rest identified as males.

Police added there were no serious injuries among any of the individuals, and investigators believe this is a smuggling case rather than a trafficking one.

Police are trying to figure out who the victims are and who is responsible for placing them in the home.

Eyewitness News spoke with the homeowner off-camera. She said she was renting the home and had no idea what was going on inside. Shortly before boarding up the door on Friday, she took a look inside and said the home was left a mess.

She was also worried about the fact that people with COVID-19 were staying inside the house. She plans on coming back to sort everything out.