Son of HPD sergeant in need of kidney begs for donor: 'I just want him to get better' 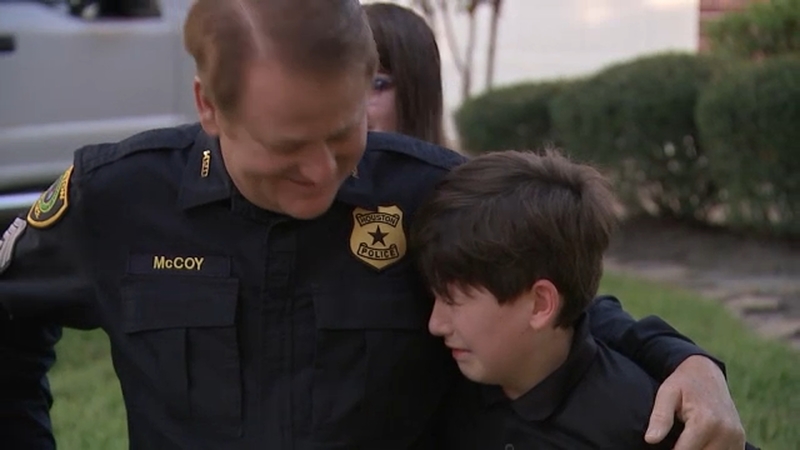 HOUSTON, Texas (KTRK) -- To many people across the city, he's known as Sgt. Wade McCoy with the Houston Police Department, but at home, he's simply a husband and a father.

Sgt. McCoy was diagnosed with permanent #KidneyFailure and now he’s one of the many 100,000Plus waiting on a deceased kidney (as they call it) but maybe someone out there who is O+ blood can be his donor? His family is praying on a miracle! His story tonight. pic.twitter.com/ocRgsvJmJT

McCoy has been dealing with permanent kidney failure the last three years and it hasn't been easy on him and his family, especially for his 13-year-old son Jack.

"He used to be able to do a lot of things, but ever since he's been sick, he's just not been able to" said Jack as he held back tears on Tuesday.

McCoy, who has been with HPD for 26 years, has been waiting since 2018 for a kidney to match his blood type - he's O positive.

According to the National Kidney Foundation, there are more than 120,000 people, just like McCoy, patiently waiting for their life-saving transplant.

On average, more than 3,000 new patients are added to the kidney waiting list each month.

Sadly, 13 people die each day waiting for a kidney transplant.

"Sometimes the wait for what they call a deceased donor can be, for my blood type, six to eight years," said McCoy.

What most people may not realize is that anyone who is a match could donate a kidney and still carry a normal life.

"It's not just one person, it affects everybody," said McCoy. The family has managed to work around the officer's dialysis treatments.

He goes to a clinic for three hours three times a week.

"I just want someone to help him," said Jack. "Ever since he got sick, he's just not been himself. I just want him to get better so we can spend more time together."

The heartbroken boy is praying for a miracle and is hoping someone will help him get his dad back in perfect health.

"I just try and do everything I can to make things as normal as possible," said McCoy's wife, Janet.

Sgt McCoy and his family have been receiving a lot of calls from our amazing viewers wanting to see if they are a kidney match for him!

I pray someone is a match for him. I also pray this may inspire many more to be a living kidney donor. Hundreds of thousands wait for a match! pic.twitter.com/0Dgx63iXFg

McCoy is currently on a transplant list at Baylor St. Luke's Medical Center.

If you or anyone you know may be interested in donating, the living transplant donor number is 832-355-5506. In order to help McCoy directly, potential donors will need to give the name James McCoy and his birth date March 20, 1969.

From there, the living donor referral line will screen donors with a few medical questions before moving forward with the process.

McCoy is also on the list at Medical City Dallas. You can contact them at 972-566-7801. There is also an online application through its living donor portal or through One Medical Passport.

McCoy's family added that even if donors aren't compatible with the sergeant, both hospitals offer a swapping program that allows donors a way to potentially save others who are in need of a kidney.