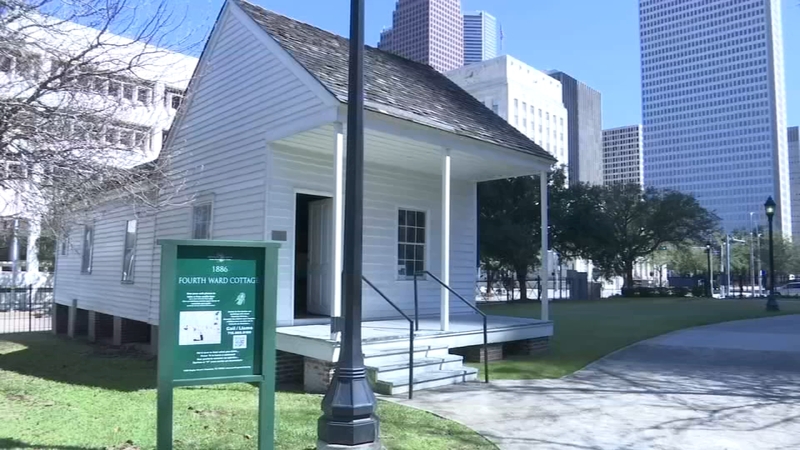 The United Nations Educational, Scientific and Cultural Organization, also known as UNESCO, designated the Kellum House, Fourth Ward Cottage, and the Yates House as part of its "Slave Route Project."

The city of Houston owns the historic homes located in the Fourth Ward's Freedmen's Town settled by emancipated slaves after the Civil War.

"People need to know about the slave route that took place and it is a cultural tourism site, and we need to highlight and uplift that. It's not about sports and musical venues. It's about the history that has helped make the city, this country what it is today and should never, never be forgotten," said Mayor Sylvester Turner.

Turner made the announcement on Monday, alongside city council members, the Heritage Society, and descendants of Reverend Jack Yates.

"Our goal in preserving homes and having these designated in the 'Slave Route Projects' is to educate residents and visitors, as well as create cultural tourism about the steps of forced migration of people from Africa, to North and South America as well as other parts of the world."

Yates, a former slave, built a home in the Fourth Ward for his wife and 10 children after moving to Houston from Virginia after the Emancipation Proclamation.

"UNESCO wrote the three houses complimented themselves as they underlined the impressive resilience and resistance that enslaved and people from enslaved descendants have endured throughout the years," said Turner. "The three historic houses are owned by the city and the designation will ensure that Houston's African American history will never be forgotten. We agree with UNESCO that the three houses are an important initiative in preserving the history related to enslaved African Americans in Texas."

"All of this, at one time, really belonged to people of color. So this is all of our history. This is what Houston is all about," said Bostic, who said she's proud of her family's rich history in the heart of the Fourth Ward that will be learning tools for all who visit.

"After coming out of slavery in 1865, (my great-grandfather) decided to own property, build homes, build businesses, have schools, did everything to build their own community. At that time there were no institutions in Houston as a community for formerly enslaved people," Bostic said" I'm very proud of the people, my great-grandfather and all of the other people who work together to ensure that our people had the things that they needed to survive."

Turner said UNESCO launched the initiative in 1994 to contribute to a better understanding of slavery, promote sites and itineraries of memory related to the slave trade and the contributions of the descendants of African people, and preserve archives and intangible heritage associated with this history.

Black History Month has ended, but the tours are year-round and available from Wednesday through Saturday, during specific times from 10 a.m. to 4 p.m., and on Sundays for reservations made in advance.