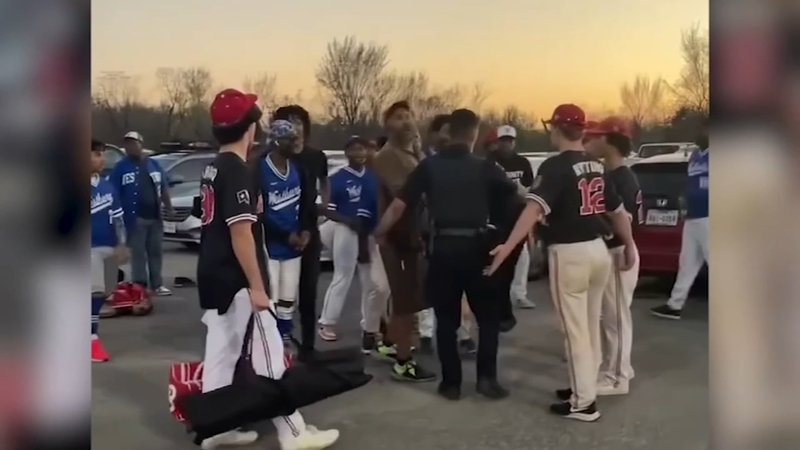 HOUSTON, Texas (KTRK) -- The long-time head baseball coach for Bellaire High School has been placed on paid leave following allegations of racist taunts by some of his players at a recent varsity baseball game.

The controversy centers around a varsity game between Bellaire and Westbury High School's baseball teams on March 25. Several parents and players on the Westbury team allege players in Bellaire's dugout made monkey noises and used racial slurs toward the Westbury pitcher, who is Black.

ABC13 obtained a video that was taken in the parking lot right after the game ended. In the video, a man described as the father of the pitcher can be seen yelling at Bellaire coaching staff about the alleged slurs. The emotions ran so high, HISD police could be seen on video trying to keep the two sides apart.

"They're in an uproar right now on what's going in Bellaire," said HISD trustee Myrna Guidry, whose district includes Westbury High School. "When the children on the Westbury team went on to the field, the children who were on the Bellaire team were making extreme monkey noises and sounds, and animal sounds."

Parents on the Bellaire team told ABC13 that while it's possible kids in the dugout may have made some noises, they do not believe Coach Ozuna was involved, as he was focused on the game. The parents were reluctant to speak on camera, citing the heightened emotions on all sides.

There is now a full-scale investigation into the March 25 varsity game by HISD. ABC13 has reviewed emails showing the HISD police chief is actively involved.

Ozuna's lawyers, who say they are representing the coach pro bono, released a statement, saying in part:

"We're gathering all the facts possible, and determine if there is any wrongdoing," HISD Superintendent Millard House told ABC13 when we met up with him at the district's headquarters early Thursday. "Wrong is wrong, and right is right, and we want to make sure all our children, and adults on campus are safe, and feel like we have an environment that is welcoming all individuals regardless of who they are and what they look like."

House urged all sides to be patient as the investigators gather all the facts, which is expected to take some time. However, as seen in the video that's circulated widely between both schools, few parents are calm about the situation involving their kids.

Besides the investigation into the game, HISD has reopened an investigation into another baseball player who left Bellaire High School in January, after Coach Ozuna allegedly ridiculed his hair. Ozuna's attorney said they have emails showing other parents thanking Ozuna for reminding their sons to cut their hair.

"So with all of those incidents brought to light, starting out initially with the hair incident, I think it deserves some serious investigation and questions to be asked," said Guidry.

It is expected that Westbury parents and Bellaire booster club parents are planning news conferences in the coming days to get their side of the story out. Meanwhile, the Bellaire varsity team will play their first game without their head coach this Friday.