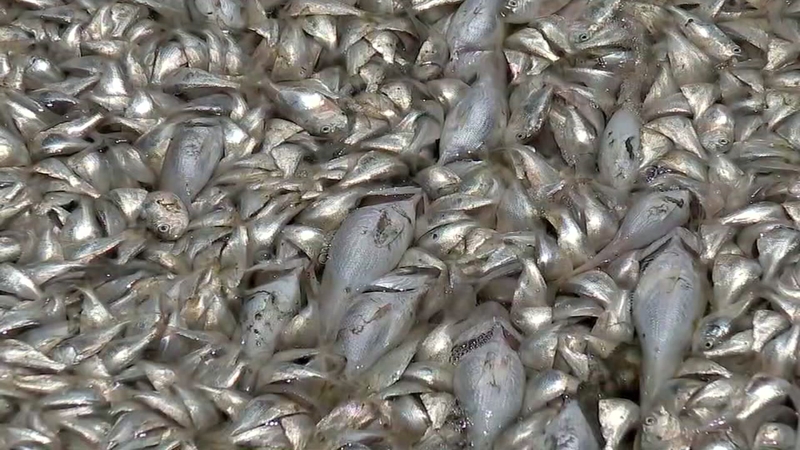 HOUSTON, Texas (KTRK) -- The hot weather is being looked at as a possible cause for the death of thousands, if not millions of dead fish washing up at the Houston Yacht Club.

Fish kills happen in southeast Texas. That's a part of the circle of life, according to state officials.

In this case, the fish known as Menhaden, shad, or shiners found themselves with not enough oxygen.

One woman told ABC13 the first sign of trouble was the air conditioner on her boat stopped working.

"When I got out here, it was like snow all over," Athena Barrett said.

Everywhere you look at the Houston Yacht Club, you see the same thing: dead fish.

Boat owners say they have seen summertime fish kills in the past as hot weather depletes oxygen supplies in the water, but the size of this event is surprising.

This is not the first fish kill reported this year.

For boat owners, the dead fish clog intake lines used to cool engines and air conditioners, so those will have to be cleaned.

"Got to clean out my strainers, potentially clogged through hulls that can be rotted out. Basically a day or two of cleaning up," Brett told ABC13.

And then there is the smell. Because more fish are dying, it could take up to two weeks for the fish to go away, and that will make things unpleasant to say the least.

State officials have seen kills so far in Galveston, Matagorda Bay, Sims Bayou and now at the Houston Yacht Club. They say the depleted oxygen is the leading cause of those fish kills so far.

According to ABC13 Meteorologist Travis Herzog, the nearest water temperature measurement in the bay (at Eagle Point) showed the temperature warmed four degrees Tuesday, from 87 degrees in the morning to 91 degrees between 4-7 p.m.

That's a big swing, and that's hot for this time of year.

"Typically, about this time of year, you will see a small fish kill. This is bigger than I have ever seen," said Brett Barrett, who lives on a boat.

"Every now and then, you see that kind of fish kill... stagnant. Lack of oxygen. A little bit of a die off," said David Dillman, the manager of Eagle Point Fishing Camp in San Leon.

Dillman says the fish are a minuscule amount, compared to what he's seen out in the bay.

He also says don't let fish kills like this discourage you, and that it's time to actually go fishing, but just further out in the water.

"As good as it gets. You can't ask for anything better than that," Dillman says.

Officials with Texas Parks and Wildlife say they have gotten several calls so far this year about fish kills. They say that hot weather is behind the event because it depletes the oxygen supply in the water.
Galveston, Matagorda Bay, and even Sims Bayou have seen same fish kills. pic.twitter.com/eYX4Lc8DCA