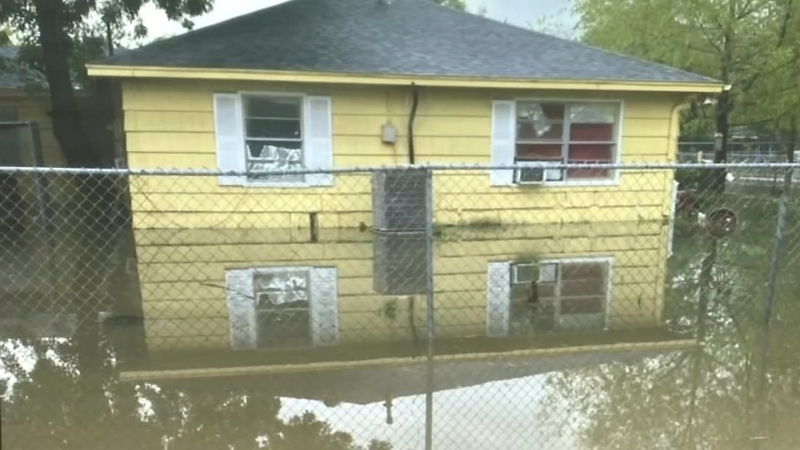 The Northeast Action Collective or NAC gathered on the steps of city hall Tuesday afternoon to protest for better drainage systems in northeast Houston. They are demanding the city of Houston to change how they fund drainage and maintenance problems in low-income Black and brown communities.

Community members said they are tired of dealing with drainage system issues in their neighborhoods specifically in BIPOC communities where Black, brown, and indigenous people of color live.

"I sometimes cannot leave my home because my streets are impassable. Neighborhood children have to wade through stagnant waters in order to get to the school bus. Seniors with disabilities can't get to their metro lift rides for dialysis," a protester said.

Hurricane Harvey Survivors formed the Northeast Action Collective (BAC) to support each other through the years-long recovery process and prepare for future storms.

They said they have watched for years as communities with BIPOC have been neglected when addressing drainage system issues and investing in solutions to fix the problem.

"We have been misled and run in circles. We've been told fairy tales about projects that will come soon. Equitable funding and ways to participate that are complete dead ends," said one man at the protest.

Some northeast Houston residents said they are still living in damaged homes ravaged by the catastrophic wrath of Hurricane Harvey in 2017. They said they have seen much of the funding to fix and maintain drainage systems in predominately Black and brown neighborhoods go to wealthier and predominately white neighborhoods.

"Over the years, the drainage got bad, got worse," said Doris Brown who's lived in northeast Houston for more than 50 years. "We started to flood. The streets were torn all up. We couldn't get (anyone) to come out and fix and finally, the neighborhood just went, as neighborhood do when you don't put money back into the people or the neighborhood."

Veronica Medina said she survived Hurricane Harvey but is scared when it rains because her home still floods, even during moderate rainfall due to inadequate drainage in her zip code.

She said the city of Houston and Harris County hasn't helped her.

One man said during Tuesday's protest said that residents in District B have been misled and run in circles, "We've been told fairy tales about projects that will come soon. Equitable funding and ways to participate that are complete dead ends."

The NAC is demanding equal protection from flooding as part of their right to fair housing and they're demanding the City of Houston show they are committed to resolving these issues.

They are demanding the city of Houston:

1) Increase the money to fund drainage issues in BIPOC communities.

2) Maintain and repair ditches and other drainage infrastructure.

4) Create a point person for residents to call for drainage issues in northeast Houston.

ABC13 reached out to Councilwoman Tarsha Jackson who represents District B in northeast Houston. She hasn't yet responded to our requests for comments about Tuesday's protest at City Hall, but Brown said Jackson is trying.