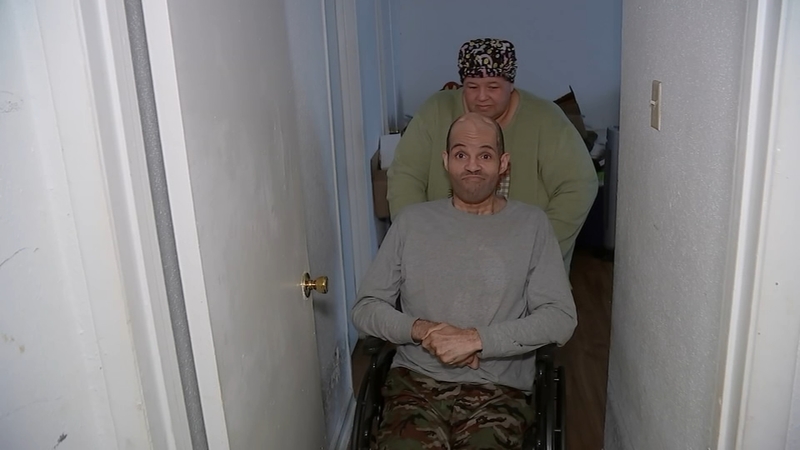 HOUSTON, Texas (KTRK) -- This is Houston, not Whoville, but somehow a Grinch made his way to a southwest Houston apartment, and ruined a family's Christmas.

"I have nothing to steal," said a frustrated Cheryl Boone, who shares an apartment with her son, Sean Davis.

Getting around is hard for Davis, who barely survived after he was shot in the head years ago. Because of his traumatic brain injury, Davis can't talk much and doesn't walk. He uses a custom-built wheelchair to get around and his mom is his caretaker.

On Dec. 7, Boone, who struggles to make ends meet, went to her church to pick up items from the food pantry. When she returned home, she noticed Davis was sitting in the recliner and not the wheelchair.

"I said, '(Davis), where's your chair?' And he said, 'The man took it.' And I'm like, 'What do you mean the man took it?" recalled Boone. "The man picked him up, put him in the recliner, and said 'Thank you for the wheelchair.'"

The incident left Boone questioning who would take her son's wheelchair.

"I'm in shock. Why would you take, a wheelchair? I can see you stealing a car, anything else. But a wheelchair from someone who can't help themselves?" she questioned.

For the past two weeks, Davis has relied on a much smaller wheelchair that belonged to his late grandmother in order to get around. He's 6 feet and 4 inches tall, so the wheelchair is clearly too small. Boone said the chair tips over and Davis has fallen out of it several times.

"He falls backward because his legs are too long. His other wheelchair had a stopper, for when he went backward. This one has no stopper," Boone said.

The family has started a GoFundMe to buy a new chair. So far, it has already raised several thousands of dollars. ABC13 also contacted the state agency that originally helped Davis obtain the wheelchair to see what else can be done.

However, all of that takes time, because a custom wheelchair is not something readily available. Boone now just wonders, why steal it at all?

"That's worse than the Grinch. I don't understand that. A wheelchair of all things," she said.

In that children's book we all know so well, the Grinch's heart eventually grew. After all, if they could have a Christmas in Whoville, surely we can have one in Houston too?