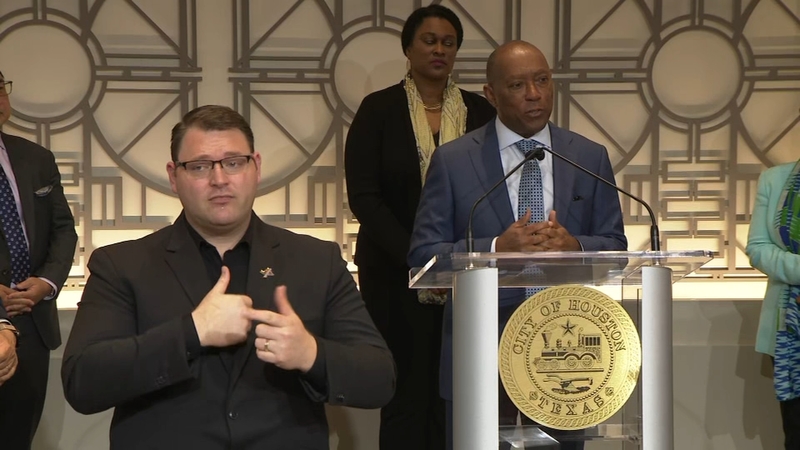 HOUSTON, Texas (KTRK) -- On the heels of a revelation Monday that half of Harris County's coronavirus cases were from community-spread, the city of Houston addressed its response to the fast-growing outbreak.

So far, at least 16 of those cases involved those who had recently traveled.

THE LATEST: Here is every coronavirus case reported in the Houston area

On Monday, Turner accepted a large donation of medical supplies from the Asian Chamber of Commerce, whose members recognized the city for supporting its businesses last month amid stigma for the virus that appeared to have grown from China.

The donation is significant during a shortage nationwide of certified masks supplied to medical workers while treating or testing for COVID-19.

Turner played up the importance of social distancing. Earlier Monday, Harris County Judge Lina Hidalgo said officials weren't exaggerating when the practice was a "matter of life and death."

The city already banned dine-in restaurant, bar and nightclub operations just days ahead of a statewide disaster declaration. So far, there has been no "shelter-in-place" order for residents in the nation's fourth largest city. Of this, Turner hit back at the Dallas County judge's "shelter in place" claim that referred to Harris County making a similar order.

Examining Dallas County's order, Turner said there's "a laundry list of exceptions" that includes liquor stores, for example. For its part, Dallas County is revisiting the order each day. Instead, Turner added that the city is thinking through any possible order, striking a balance between the safety of Houstonians and not making any blanket orders deemed unnecessary.

Still, Turner spent the weekend to kill what he has called "social media hoaxes." He also promised those who created the rumors will be prosecuted.

While the city hasn't specifically said how many of the cases recovered, Harris County stated at least 11 of its cases are considered recoveries.

According to the city, more than 500 high-risk symptomatic people were tested for COVID-19 at Houston's first community-based testing site during its first three days of operations. The testing was expected to resume for medical professionals, first reponders, people 65 and older, and people of any age with chronic illnesses.

A call center was set up for people who meet the symptom criteria, including cough, difficulty breathing and fever. The number is 832-393-4220, and the call center is available between 9 a.m. and 7 p.m.