Houston consumers and businesses hit by near 40-year high inflation: 'Everything went up' 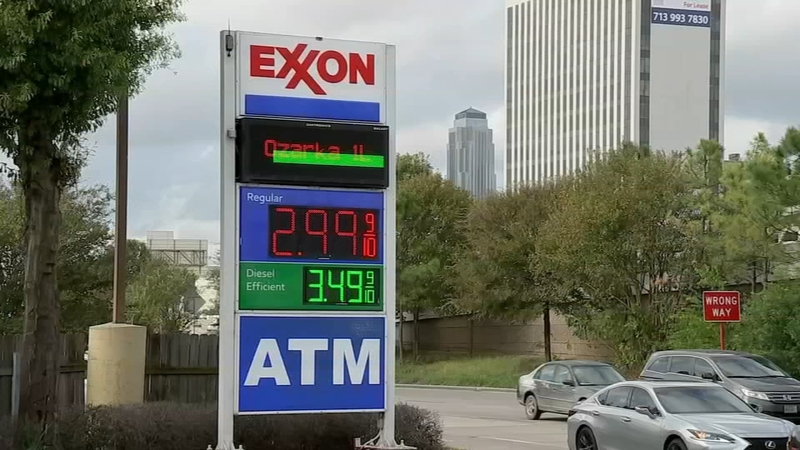 Inflation is alive and well, so when will prices normalize?

HOUSTON, Texas (KTRK) -- We've all noticed it - things are costing more right now. Whether it's used cars, groceries, or the price of gas, it's up big from a year ago.

It might be most obvious at the gas pump. That's where you see the numbers tick higher and higher as you fill-up. Dana Wempe has seen it. ABC13 asked Wempe about inflation as she filled up her SUV.

"Inflation is real and it's happening all around us," Wempe said. "Thanksgiving, to buy turkeys, steaks, everything went up. It's affecting a lot of people."

Mohammad Niazai sees it too. He drives rideshare for a living and said he sometimes works only to pay for fuel.

So, why are prices up? ABC13 spoke with Greater Houston Partnership economist Patrick Jankowski to figure that out.

"We're paying $1 more per gallon than we paid this time last year," he said. "Part of it is demand and part of it is we've had six refineries shut down in 2021."

Jankowski said it could be 12 to 18 months before we see a significant change.

"The cost of furniture is up nearly 12%," Jankowski said. "The cost of major appliances is nearly 60%. The costs of clocks and lamps, that's something BLS tracks are up nearly 4%. "

But on Tuesday, the White House told ABC13 that gas prices are down 10% in recent weeks in Houston and that they're doing what they can to lessen the burden on consumers.

Small business feels the pinch too. It certainly feels a lot like Christmas inside Darlene's Flowers, Gifts, and Boutique in northwest Houston. While they have not seen the huge spike yet, sisters and owners Judy Bankhead and Susan Tate said the increased cost of doing business is still anything but a holiday.

"The one thing we have noticed is that when we go to ship something, how much more it is," said Tate. "That's been kind of mind-boggling."

Supply chain delays and shipping costs are up and they're doing their best to not pass on the increases to their customers, only marking up prices for more recently received items that cost so much more to stock.

SEE ALSO: Grocery, restaurant prices spike: Food is more expensive than it has been in decades

"People will notice in the store, there may be two alike and one may be priced one amount and one maybe $2 more," Bankhead said. "I wasn't going to raise the price of what that was originally, but I did have to if it was something that I received later on."

They've also noticed the increased cost of fuel. But they say they're lucky. They have great customers and they're doing well considering. They're hoping the economy shifts and inflation flattens. Inflation is up 6.8% in the last year. That's a nearly 40-year high.

"The really easy explanation is that it's pent up demand, but inside every sector, there is something else that is affecting it," Jankowski said.

As we all navigate this pandemic-fueled economy, the White House remains optimistic. Americans in recent polling don't approve of the Biden administration's handling of the economy so far. On Tuesday, the White House told us they're hopeful passage of the Build Back Better Act would be a shot in the arm.

In the meantime, small businesses like Darlene's are doing what they can to stay merry and work toward a happier new year.