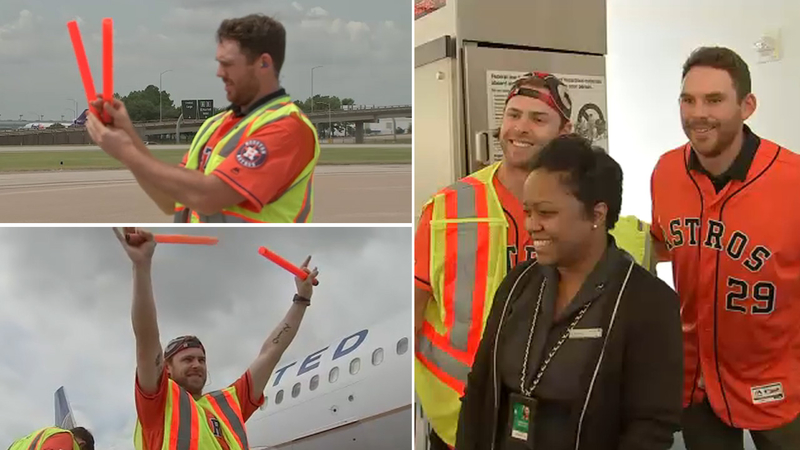 Astros' duo teams up to bring the laughs at United terminal

HOUSTON, Texas (KTRK) -- Two Houston Astros players hit a home run, and they weren't even in the ballpark.

And along with their baseball skills, it appears they've got some comedic chops, too.

Biagini hopped on the intercom and told the passengers before they boarded that they were just going to pick a spot to send them. He then passed the intercom to Reddick, who inhaled helium and continued the jokes.

"We are boarding by strength, so whoever is the strongest gets to go first, and then we'll arm wrestle as we go to decide the order," Biagini said.

"If you'd like to go to Disney World, you can go on this flight to Orlando. It's going to be a pretty short flight," Reddick said in a high-pitched voice, noting that he's been to both Disney World, in Florida, and Disneyland in California.

Based on the laughs and the smiles, it appears these customers definitely had a sense of humor.

Surprise! Houston @astros outfielder Josh Reddick and pitcher Joe Biagini spent the day taking on new jobs as flight attendants they helped @united customers flying to Orlando board their flight. This has been hilarious!! @abc13houston pic.twitter.com/xWy9deGTh1

After everyone boarded, the real work began for the duo outside.


Clad in yellow safety vests that said "Manager" on the back, Reddick and Biagini teamed up to get "W" when it came to customer service, loading bags and pushing planes.

But do they see themselves having a future as air traffic controllers?

"I don't know what my career options will be after baseball, but I'm a little concerned about accidentally directing one plane into another plane," Biagini said.

The event kicked off with Reddick and Biagini signing autographs and posing for pictures with United employees.

United is a partner of the Houston Astros.

After telling this United flight they were going to just pick a spot on the map to send them. Now @astros players Joe Biagini and Josh Reddick are helping to get their flight off the tarmac and in the air... hmm wonder how confident they feel from the plane 😂@BrheABC13 pic.twitter.com/blszZQATDp

Surprise! Houston @astros outfielder Josh Reddick and pitcher Joe Biagini surprised @united employees at IAH. Signing autographs and taking pictures. These 2 are currently keeping the whole room laughing! But that’s not all they have planned for the day. @abc13houston pic.twitter.com/XKAOrMgzJA

Josh Reddick and Joe Biagini entertained customers and employees while they were on the tarmac.