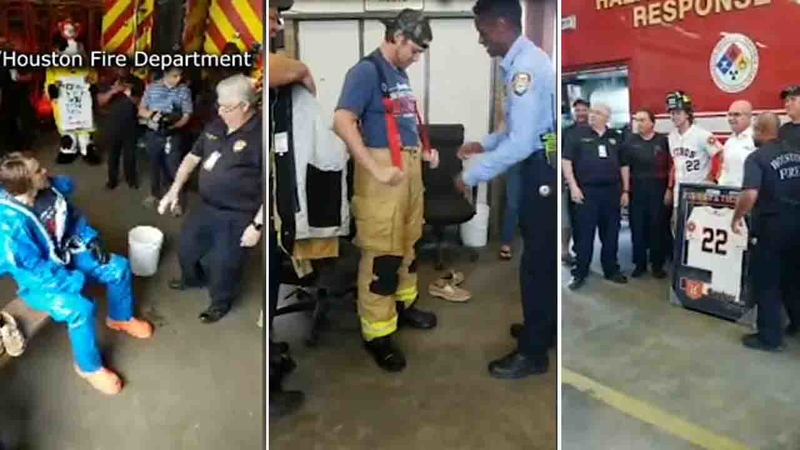 HOUSTON, Texas (KTRK) -- Houston Astros outfielder Josh Reddick appeared to fit right in with the Houston Fire Department during a visit to Fire Station 22 on Tuesday.

HFD went live on Facebook with the star as he suited up in a Hazmat suit at the station on Harrisburg.

After slipping out of the gear and back into his Astros jersey, Reddick stepped into one of the fire trucks for a tour.

Reddick's day in the life of a firefighter continued when he put on the full firefighter equipment.

The Astros Foundation presented the fire station with a Reddick jersey. He wears 22, the same number for the station.

In turn, Reddick received his own firefighter helmet.

Earlier this month, Reddick's teammates, Alex Bregman and Tony Kemp, stopped by Fire Station 17 to present a generous gift from OnStar as a thank you to the firefighters for their service.

The company surprised the firehouse with a pair of season tickets to Astros games and a new, fully-loaded and upfitted Chevrolet ambulance.


Station 17 also has a special connection to the hometown team. The station acts as the "still alarm" for the Astros, meaning they're responsible for responding to emergency calls at the ballpark.

Last year, the Astros Foundation recognized HFD for its service and introduced the Adopt-A-Fire Station Program.

Station 18 on Telephone Road received a Tony Kemp jersey, which was fitting since his number is 18. Firefighters then presented Kemp with his own fire gear.

Get to know more about Tony Kemp