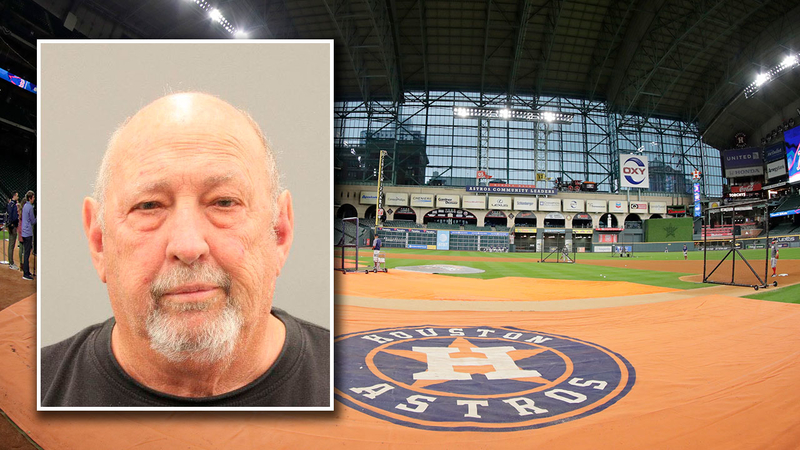 HOUSTON, Texas (KTRK) -- While the Houston Astros and New York Yankees slugged it out in Sunday's Game 2 of the AL Championship Series, a season-ticket holder in the stands allegedly slapped another fan in the back of the head, multiple times.

"He's a big guy with long arms, so he just reached back and slapped him on the face," said Lea Menchaca, who was sitting in the same section and witnessed the incident.

"(Dinkins) reached back and slammed him on the face, five times, like repeated five time slap," recalled Menchaca, who says the Yankees fan was attending the game with his mother. "As soon as that happened the mom was like, 'No you don't touch him, what are you doing?'"

The victim in this case, Manuel Bitolas, is a Yankees fan living in West Texas. Reached on the phone today, Bitolas says he cheered on the Yankees and Dinkins then exchanged words with him. Bitolas said he thought Dinkins was just joking, not realizing he was actually angry.

"I told him something and patted his shoulder and he said, 'Don't f-ing touch me,'" recalled Bitolas, who was sitting next to his mother. "I bent over to get my drink and he like hit me. And I was kind of surprised about it."

Court documents show the family reported the incident to nearby police officers, who then questioned and later arrested Dinkins.

The slapping incident was captured on video surveillance in the ballpark, confirmed by Nathan Beedle, Chief of Misdemeanor for the Harris County District Attorney's Office.

"I have not seen an assault in the stands happen, which is why the allegation is so concerning," said Beedle. "I would just say common sense is not to be touching anyone else period, generally. I would stick away from that, regardless of the venue."

Dinkins, a season ticket holder and a long time Astros fan, is well known to fellow regulars in Section 105 of Minute Maid Park. Nicknamed "The Judge" because he was once a Justice of the Peace, Dinkins allegedly got in verbal altercations regularly with other Astros fans.

"It gets old. Like every time someone cheers, whether it's for the Astros or against the Astros, I get nervous," said Menchaca. "I don't know if this guy was going to react. It makes it unenjoyable for everyone around him."

Bitolas and his mother left the game after the incident, while Yankees and Astros were still tied. "It just wasn't worth it," he said to us.

A check of his prior criminal record showed that Dinkins was also indicted on a federal charge of conspiring to obtain approximately $120,000 in disaster relief funds by fraudulent means in 2012. Dinkins was accused of applying for the funds in the wake of Hurricane Ike.

Houston Astros said it was unaware of the incident until it began getting media calls today. It is investigating the situation.