A pair of armadillos were also found and seized in the April 1 stop.
KTRK 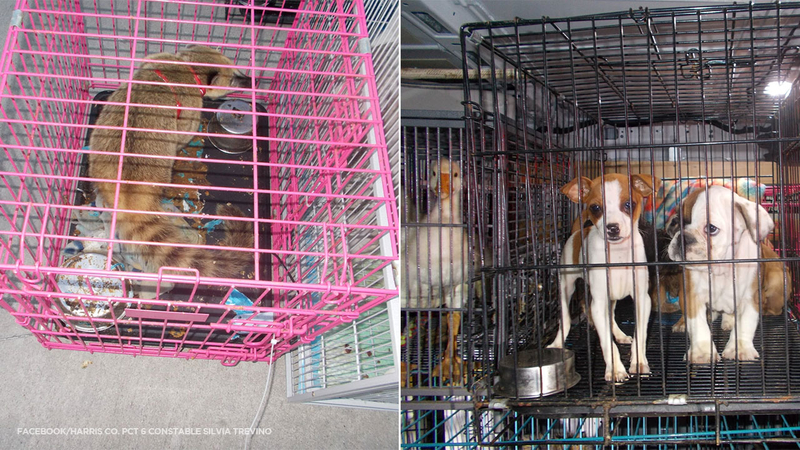 HOUSTON, Texas (KTRK) -- An exotic animal that is considered a threatened and protected species was among 32 creatures found inside a stolen moving van during a traffic stop earlier this month in Houston's Denver Harbor area.

The office of Harris County Precinct 6 Constable Silvia Trevino posted information on Facebook about the stop that happened on April 1 in the 800 block of Lockwood Drive.

According to the post, a strong odor of ammonia was emitting from the vehicle during the stop. A constable's sergeant also saw small cages containing large animals that appeared to be in need of medical attention, with many of them living in their own filth.

After the driver of the van was detained, deputies discovered a variety of animals inside, including 19 dogs of various breeds and sizes, six cats, four ducks, and a pair of two-ring armadillos.

In addition, deputies located a white-nosed coatimundi, or coati, which is a house cat-sized mammal generally native to South America, Central America, Mexico, and the southwest U.S. The animal, which sports features of a slightly upward-turned nose and a tail, is believed to be declining in numbers due to threats from hunting and environmental destruction.

The person detained in the stop, who was not immediately identified by the constable's office, was charged with animal cruelty-confinement and later felony theft of property between $30,000 and $150,000.

Texas Game Wardens and Houston police assisted at the scene, and a BARC representative took possession of the animals.

"Thank you to HPD, the Texas Game Wardens, and BARC for your assistance with this case and for working diligently to make sure these animals receive the proper care they deserve," the constable's Facebook post read.

Disturbing video shows a man holding the poor Shepherd mix by the tail and dangling the animal about 15 feet above concrete. Thankfully, the 1-year-old pup is safe with HSPCA.

The veterinary team said one of the puppies registered a temperature of 104.1 after being taken in. Thankfully, the puppies are now recovering at the shelter.