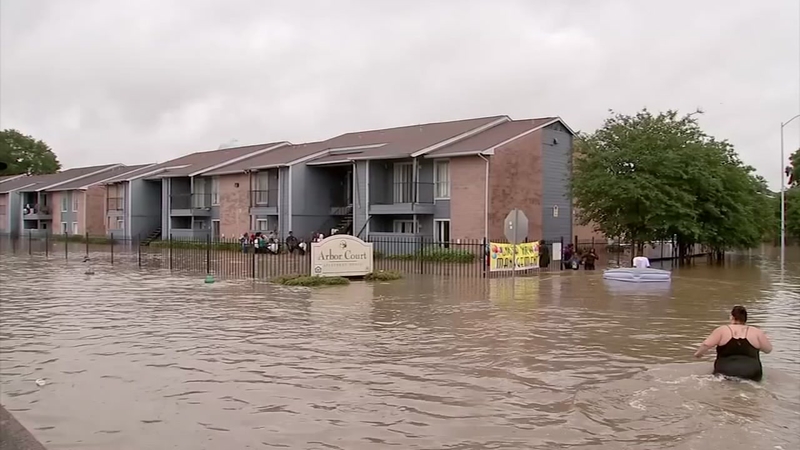 HOUSTON, Texas (KTRK) -- An apartment complex and a government agency are now facing a lawsuit over flooding -- because half the complex is in an area essentially deemed part of the bayou by FEMA.

Low-income families are placed in the Arbor Court apartments by the federal government as part of its rental assistance program.

Despite being in a location most prone to flood, tenants say they are never warned of the danger.

The complex at 802 Seminar backs right up to Greens Bayou.

Daija Jackson tells us her bottom floor apartment -- freshly furnished for her brand new baby -- was filling up with water fast. She says she had no idea the complex flooded before and couldn't imagine the water would rise right up to the top of the doorway.

She grabbed her two children and left with a friend through knee-deep water.

When she got back:

"Everything was just destroyed no matter how high we tried to put them."

Daija moved in just months after the Tax Day flood in 2016. While she says office staff encouraged her to get insurance, she says she was never warned the complex is in an area called the floodway -- land most likely to flood in heavy storms.

"Literally half of the complex is within the floodway," said lawyer Kimberly Brown Miles with Lone Star Legal Aid. "Whenever there's a rainstorm, the bayou swells. It's very, very easy to flood."

Miles filed a lawsuit on behalf of Daija and 12 other Arbor Court tenants.

The suit claims that the apartments are infested with insects and rats and unsafe and blames the U.S. Department for Housing and Urban Development for continuing to contract with the complex, despite the problems.

"HUD has ignored the conditions and so at this point, just continues to send them the check and they continue to cash it and without any punitive action from HUD," Miles said.

But Daija and many others say they can't leave the complex or they'll forfeit their rental assistance and have to start the process over again, taking months. She moved to an upstairs unit in the same complex, but complains in the lawsuit that inside that apartment, there's black mold and chronic issues that need repair.

She and most other tenants pay a portion of their income towards rent. The vast majority of rent is subsidized by HUD.

ABC13 Investigates found the complex's owner is paid just under $2.5 million each year in subsidies. Even after both floods, HUD renewed its contract to place low-income residents here.

Those records show the same management company gets HUD money for at least 10 other properties across the nation -- four others in the Houston area.

Repairs on the complex have stopped after the city of Houston denied the complex building permits.

"We're arguing that it's obvious to HUD that these owners are not complying with regulations," Miles said. "And in turn, HUD, also according to its own regulations, has the right to terminate these contracts."

We tried to get a comment from the owner and the management group in person, on the phone and via email. All went unanswered. HUD's also not answering questions, it says because of the pending lawsuit.

Daija says she wants the same opportunities for her and her kids as anyone else without the looming threat of another flood always in the back of their minds.

"Some people just have money, sometimes some people don't, but it doesn't mean that we should live less than you."

The lawsuit goes in front of a judge in October.

Have a tip for Ted Oberg? A problem to solve? Get in touch with us on our tip page, or send a tip below. (On mobile? You can open our form by tapping here.)
Related topics:
home & gardenhoustonted oberg investigateshurricane harveyapartmenthouston floodaffordable housing
Copyright © 2021 KTRK-TV. All Rights Reserved.
TED OBERG INVESTIGATES