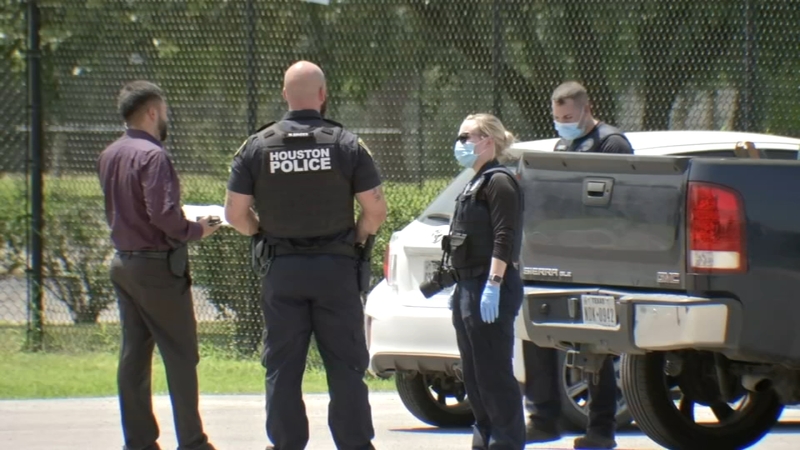 HOUSTON, Texas (KTRK) -- Two men were injured on the campus of Houston Community College in a parking lot after an in-car altercation between four of them led to a fight over a gun Saturday.

Officers with the Houston Police Department said they received an initial call about a shooting around 12:18 p.m.

North Patrol Officers are on the scene of a double shooting in the parking lot of the Houston Community College at 8000 Fulton St. Preliminary info is two males reportedly struck by gunfire. #hounews#CC3

Assistant Police Chief Ban Tien said soon after, dispatchers began receiving simultaneous calls that were all in regards to the same shooting. Tien said one of the callers provided officials with a specific tip that helped them quickly track down a person of interest.

The shooting reportedly happened after the four men who were sitting in the same car began some sort of disagreement, according to HPD.

Investigators said when the argument escalated, two of the men began to fight over a gun. Moments later, one of the men was reportedly able to get ahold of the weapon and shot the victim in the chest.

Two men were injured after an altercation at Houston Community College on Saturday. One of the victims was shot in the chest, and another one suffered stab wounds.

When officers arrived on the scene, they said they found one of the two victims suffering from cuts and stab wounds, while the other was found with a gunshot wound to his chest.

The two other men attempted to flee, but Tien said thanks to information from a vigilant member of the community through the "See Something, Say Something" tip-line, they were able to arrest one person of interest near the college.

Officers said they're still searching for a fourth man who was described as a Hispanic man, in his mid 20s, wearing black shorts.

The man who was shot in the chest was undergoing surgery at Ben Taub hospital, but is expected to survive. The other victim, who suffered stab wounds, was transported to Memorial Hermann hospital where he was reportedly in stable condition.

HPD investigators said so far, they were able to recover the gun and a sizeable amount of narcotics.

When asked about Houston's recent increase in violent crime, Tien said "This uptick is not just in the city of Houston, but throughout the nation as well. But, I will assure you that my chief of police, Troy Finner has directed us, his executive staff, to put in a lot of resources to address those concerns. But the key is, despite our best effort, we need a community involved. And community support."
Report a correction or typo
Related topics:
houstongun violencehouston community collegeshootingdouble shootingman shotviolence
Copyright © 2021 KTRK-TV. All Rights Reserved.
VIOLENCE
Postal worker accused of shooting man released on $30,000 bond
'I have a big hole in my chest': Shooting victim walks back to scene
Texas laws now in effect, including permitless carry
DHS warns of increasing threat of violence from Trump conspiracy
TOP STORIES
14-year-old shot and killed on trail in Kingwood neighborhood
Driver dies after being shot on Westpark Tollway, HPD says
Man accused of killing HPD officer is no stranger to police
Everything we know about the HPD officer killed on duty
1 HPD officer fatally shot, 1 injured while serving warrant
Fall front moves in late Tuesday bringing cooler temperatures
White House looking into footage of Border Patrol agents on horseback
Show More
HPD suffers 5th line-of-duty death in last 16 months
How neuroengineering is helping people fight addiction in Houston
US launches mass expulsion of Haitian migrants from Texas
Texas doctor who defied state's abortion ban sued for $100K
ABC13 town hall to explore COVID-19's impact on Hispanics
More TOP STORIES News