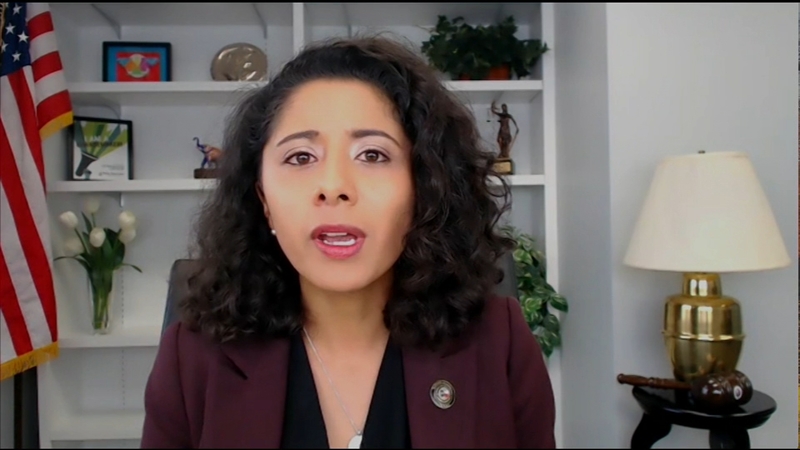 Judge Hidalgo says her authority was 'stripped away' during pandemic

HOUSTON, Texas (KTRK) -- During an interview with "GMA3: What You Need to Know" on Friday, Harris County Judge Lina Hidalgo discussed a number of things including the 2020 presidential election and the county's COVID-19 response.

Hidalgo said although she felt like the area had COVID-19 under control in the earlier stages of the outbreak, she feels President Trump "stripped away her authority" in April, which caused an increase of COVID-19 cases in Texas and Harris County.

"We had things under control here in Harris County. We were doing better than pretty much every major city and major county. But in mid-April, President Trump asked the states to reopen. About a week or two weeks later, Texas followed suit. So, they opened things before we were ready and stripped away my authority," Hidalgo said. "And since then, at that point, we started seeing the sharp increase in cases from which we're still recovering today."

Hidalgo also added that although Houston is seeing a decrease in positive COVID-19 cases, Harris County still has a positivity rate of 10%, when it should be around 5%.

"We know how important it is to have in-person instruction. But the places where it's been successful, are the areas where they brought the caseload way down, and that's why it's important not to give up too early," Hidalgo said. "So for me, we have the thresholds where I think there's going to be some percentage of instruction that is safe, but we are seeing around the country, the areas that are opening schools before they're ready, they have to open and shut back down. And same with the other decisions and the impact those decisions have had on the economy. If you do it too soon, ultimately, you invest funds, energy, logistics to open, and then, you have to turn right around and close things again, which is of course a ping pong that is not good for health, and it's not good for confidence in the economy, it's not good for the kids, for the teachers etc."

With the pandemic changing so much of our everyday lives, Hidalgo also stressed the importance of voting in this upcoming presidential election.

The Harris County Judge said she's working overtime to ensure the county has a safe, secure and accessible election.

"We have 24-hour voting in seven locations, we have drive-thru voting, polls will be open until 10 p.m., and we have triple the number of early voting locations. We are trying to be able to send a mail-in ballot application to every voter in Harris County. We're being sued by the state for that, but we keep fighting fundamentally, regardless of who people vote for. We want folks in the largest county in Texas to be able to make their voices heard, and to make sure we're preserving the trust in the key democratic institution, that is voting and elections," Hidalgo said.
Report a correction or typo
Related topics:
politicshoustongmaeducationvotingjudgecoronavirusschool2020 presidential electioncovid 19 pandemiccovid 19 outbreakcovid 19
Copyright © 2022 KTRK-TV. All Rights Reserved.
TOP STORIES
5-year-old dead amongst two children shot in north Houston, police say
Hot and mostly dry for Sunday and the 4th of July
GOP's Ted Cruz feuds with Elmo over kids getting COVID-19 vaccines
1 man found dead near a food truck in NW Harris Co., deputies say
VP Harris speaks on 'outrageous' repeal of Roe at Essence Festival
Uvalde school police chief resigns from city council
Texas woman accused in cyclist's death arrives at IAH
Show More
Driver dies after explosion at Battle Creek Air Show in Michigan
Man wakes up to robbery suspects in his SW Houston apt., police say
Texas Supreme Court blocks order that resumed abortions
Video shows man robbing smoke shop at knifepoint
Man flees and shoots at officers, drowns after stabbing himself
More TOP STORIES News