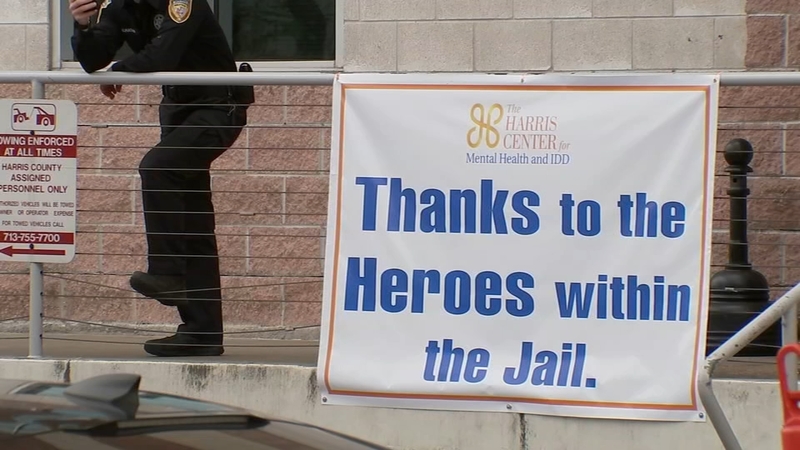 Harris County jail employees worried of being infected with COVID-19

HARRIS COUNTY, Texas (KTRK) -- The number of positive cases of COVID-19 among Harris County Sheriff's Office employees assigned to the jails have started to slow, according to data charted by ABC13.

Still, the jails are the most likely place to catch the virus if you're a sheriff's office employee.

COVID-19 hit the Harris County jail at the end of March.

By April 2, one employee had tested positive. He was a detention officer in his mid-20s. Since that report, the numbers have risen.

The biggest spike was on April 23, when the number of positive tests grew by 43.

"It's an enemy we can't see and it's kind of ground zero inside our detention facility," said David Cuevas, President of Harris County Deputies' Organization and a sergeant in the HCSO Homicide Unit. "We have to take the advice from Harris (County) Health and our common sense and take all precautions necessary."

Cuevas said the top concern he hears from employees assigned to the jail, like detention officers and deputies, is that they are going to get infected and take it home to their families.

HCSO has implemented a number of safety measures.

Everyone who enters the jail is screened for fever, must wear a mask and social distance when possible. Those with symptoms are isolated, and anyone exposed is quarantined. Soap, water and hand sanitizer are more readily available. Inmate movement is being restricted.

According to the numbers, fewer positive cases among employees at the jail are being reported each day, and absences among staff have declined.

There are almost 100 employees who tested positive in the last five weeks and returned to work.

The numbers seem to be trending in the right direction. Though risk is always part of the job, Cuevas says.