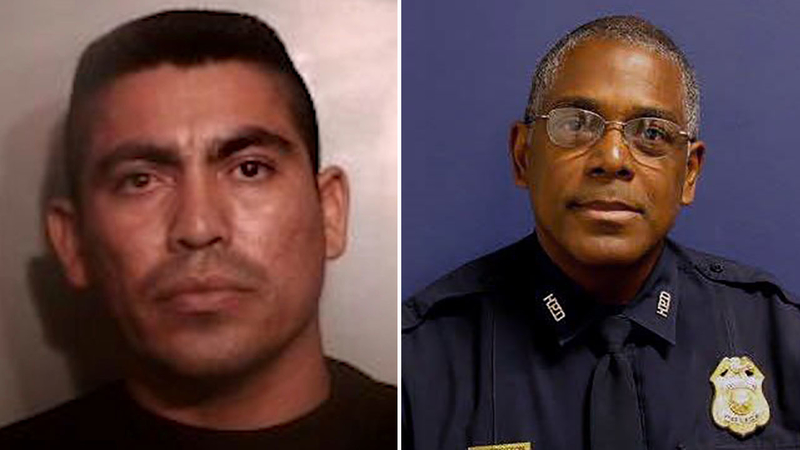 Patrick said more charges would be added as the investigation continues.

"Yesterday I instructed my prosecutors to file appropriate federal charges," Patrick wrote on social media. "I have little faith that local charges could be sufficient to hold him. Multiple times this summer (sic) filed on capital murder defendants who were released with few conditions and were still a threat to safety or those with new law violations who were left on bond."

In simple terms, Ogg based her decision due to not only an officer's death, but also injuries suffered by another officer and Manzano's own 14-year-old son. Ogg added her office will ask the judge to hold Manzano without bond.

Manzano remains at Ben Taub Hospital after officers, who responded to a domestic violence call involving him, were met with gunfire Tuesday morning in the Richmond Manor apartment complex on Holly Hall Street.

In the immediate aftermath, Chief Art Acevedo mentioned Manzano has a history of alleged domestic abuse against his family, including two calls to HPD over the weekend by Manzano's estranged wife, who had made the call to police for help on Tuesday.

After the shooting, some in the law enforcement community had mentioned Manzano could have been charged with making a terroristic threat after one of the weekend calls.

"The only person responsible for this horrible crime is the killer himself and any attempt to blame prosecutors is sadly political and not factual; the record speaks for itself; the officers in these cases didn't believe that a crime had occurred and that left no evidence on which to base any charges," a statement by the district attorney's office read.

More of Manzano's criminal history has also emerged. A search showed he had four charges in Dallas County against him across a seven-year span from 1994 to 2001. They include unlawful carrying of a weapon in 1994 and assault with bodily injury in 2001, which both were dismissed.

The two other counts, both assaults, were in October and December of 2000.

In the wake of Houston police suffering the loss of Preston, some of the the fallen officer's colleagues began a new day still working well past their shifts.

On Wednesday, the police department tweeted photos of Chief Art Acevedo meeting with the officers of the Southwest Patrol, which was the attachment that Sgt. Harold Preston worked in.

"Chief @ArtAcevedo and [Executive Assistant Chief] @TroyFinner speak with Southwest Patrol roll call this morning," the police department tweeted. "They thanked the night shift officers who stayed late, officers from other patrol divisions who've come to help, and peer support who led everyone in prayer."

Preston was shot and killed Tuesday morning when he and two other officers responded to a domestic violence call that led to gunshots at an apartment complex.

SEE MORE: In an ABC13 exclusive, HPD sergeant's fiancée reflects on his life 1 day after his death

Officer Courtney Waller was also wounded in the ordeal and was hospitalized. Acevedo tweeted that Waller was "in a great deal of pain."

The police department also received support from their counterparts in Los Angeles, who tweeted about Preston's long service.

"A tragic end to a more than four decade career," the Los Angeles Police Department tweeted. "There are few that serve for that long, and fewer that do so routinely handling calls for service. Truly a tragic loss for the @houstonpolice. The thoughts and prayers of the LAPD are with his family and fellow officers."

As of Wednesday afternoon, no funeral plans have been announced for Preston.