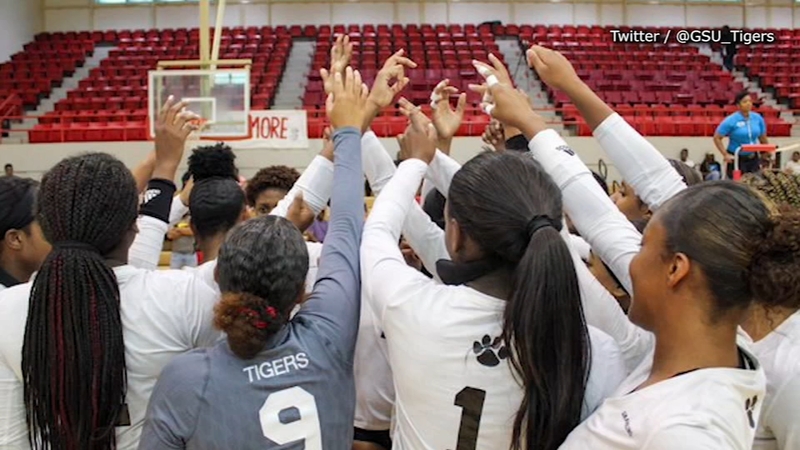 HOUSTON, Texas (KTRK) -- New Grambling State University volleyball coach Chelsey Lucas has cut more than half of the team's scholarship players and told incoming recruits that the previous coach's commitments would not be honored. Among those impacted by the roster shakeup are four players from the Houston area.

Elkins high school student, Maurisa Harris, is one of the local players who were told their scholarships would not be renewed by Coach Lucas.

"The volleyball team was not fairly given the opportunity prior to the elimination of their scholarships," said Maurisa's mother, Candy Harris. "There was no communication, direction, or support from the new head coach or the athletic director. All scholarships were terminated. "Academically, to transfer at this point would hurt all 2023 graduates as they would lose credits transferring to new schools."

"Just as the transfer portal empowers student-athletes, our coaches are also empowered to make the decisions they deem necessary to advance their programs."

Newly-hired head coach Chelsea Lucas, who played for and graduated from Grambling, says, "I met with my team, each student-athlete, individually to discuss my plans moving forward with the Grambling State University volleyball program. My decision was not to bring back some of the current student-athletes on the team. While student-athletes are granted athletic scholarships, a scholarship is not guaranteed and not binding, per NCAA rules and regulations."

Dr. Karen Weaver, a sports expert and former NCAA head coach and administrator who currently works as an Adjunct Assistant Professor in the Higher Education Division at the University of Pennsylvania, says while the move may be legal - it is not easy to swallow.

"A grant-in-aid is the school's commitment of financial resources to you," Dr. Weaver explained. "The NCAA does allow for four-year grants-in-aid, but it doesn't sound like Grambling took advantage of that. It sounds like they were doing one-year, annually renewable. So yes, in terms of the NCAA - that is legal. It was one of the reasons why the NCAA allowed institutions to do up to four years of grant-in-aid because they felt it was a student-athlete welfare issue. If you're going to cut me because I didn't have a good practice or you recruited somebody better than me - what stability do I have as an athlete in your program?"

Grambling officials have been unable to specify which players, if any, have been retained. The volleyball roster page on Grambling's official athletics website showed a "404" error message stating: "The page you are looking for no longer exists."

"This has caused financial stress and anxiety, depression with the uncertainty of their future to achieve an undergraduate degree," Harris added when speaking of her daughter's situation. "These cruel acts by Lucas and Scott are premeditated, calculated retaliations from previous incidents, which will be further investigated. These student-athletes had been mistreated by Coach Lucas and disrespected by the athletic department as a whole, and the fight will continue until justice is received."

Lucas was hired in February 2022 after spending the past three seasons at the University of Arkansas-Pine Bluff.