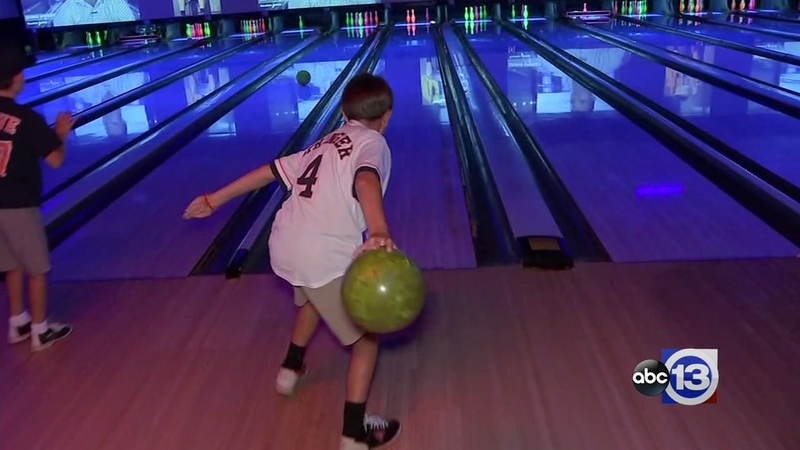 HOUSTON, Texas (KTRK) -- Houston Astros' George Springer raised money for a charity near and dear to his heart with his bowling outing Sunday night at Bowlmor.

All benefits from the event will help kids attend Camp SAY, a two-week camp for children who stutter. Over $50,000 was donated from those in attendance. The ultimate goal is to reach $90,000 in order to send kids to Camp SAY. It will be held at Pocono Springs this year.

SAY is the Stuttering Association for the Youth. Springer is currently the national spokesperson for the association. They have been active in helping children gain confidence for 14 years.

Throughout the night, Springer bowled with his family while making time to engage with the fans.

Whether it was taking pictures, signing autographs or playing video games with children, Springer made fans a priority Sunday night.

One SAY camper in particular had a special moment with Springer.

A few months ago, SAY held an event in New York and awarded Springer with the SAY Hero Award. He was unable to attend, so a boy named Finn accepted the award on his behalf. At the event tonight, Finn met Springer and gave him the award. Finn told Springer he is an inspiration to him both on and off the field.

Various organizers associated with SAY spoke on the impact this foundation has on kids who stutter and how Springer has helped changed their lives.

Songs were even made for Springer and were sung at the event.

Some of Springer's Astros teammates were present, including Chris Devenski, Brad Peacock, Tony Kemp and Lance McCullers Jr. Charlotte Hornets player Michael Kidd-Gilchrist was also in attendance. He recently spoke out on his stutter and him and Springer have formed a friendship since.

When Springer thanked all of those in attendance, he discussed how quiet he used to be before exiting his comfort zone and working through his stutter.

He urged the kids who struggle with stuttering to keep pushing and accept what comes throughout their fight.

"Everything that you want to do, you will be able to do it. But you have to put your mind to it," Springer said, telling the audience they have to handle both success and failure. He said adversity introduces someone to themselves, with him learning it the hard way.

Someone who has been by Springer's side is his father, George Springer II. He said one of the main objectives for Camp SAY is to help kids gain confidence so that when school starts back up, they are prepared to take on the world. He said George stepping out of his comfort zone is something he takes personal pride in.

Springer II said it is amazing to see George now compared to how he was as a child.

Springer II said it has almost come full circle with him being able to speak in public, project himself and do it with such comfort.