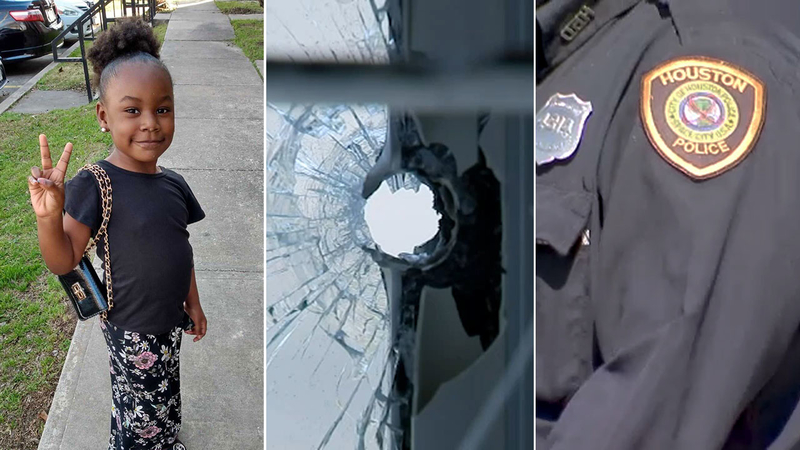 HOUSTON, Texas (KTRK) -- As family members rally around George Floyd's 4-year-old great-niece who was shot in her sleep early on New Year's Day, attention of the incident shifts to Houston police, who have launched an internal investigation into whether officers were delayed in their response to a little girl's shooting.

Derrick Delane, the father of the young victim Arianna Delane, told Eyewitness News on Tuesday that they were forced to drive the little girl to the hospital themselves shortly after she was hit at their apartment on the city's south side at about 3 a.m. last Saturday. He added that officers didn't arrive to the apartment complex not too far from Highway 288 and the South Loop until about 7 a.m., four hours after someone had opened fire several times into their unit.

"Why would my house get shot up?" Derrick Delane said Tuesday. "My daughter don't know. I can't explain that to her. As the father, you're supposed to protect the kids."

While Houston police didn't immediately disclose how long officers took to arrive at the scene, Chief Troy Finner acknowledged concern over their response time, prompting an Internal Affairs investigation.
"I am aware and have concerns regarding the delayed response time in this incident and have initiated an Internal Affairs investigation. I ask the city continue to pray for the child's full recovery and assist in providing information that would lead to the arrest of the suspect or suspects responsible," Finner said in a statement released Tuesday.

Since Finner announced the investigation, Houston police have told Eyewitness News that the chief has been in contact with Arianna's mother.

By mid-afternoon Wednesday, police clarified what their investigation entails through a statement to Eyewitness News:

"HPD isn't disputing that it took officers 4 hours or more for officers to arrive after the 911 call was made. Part of the internal affairs investigation is how long it was between when the 911 call was placed and when HPD was notified."

Eyewitness News also reached out to the Houston Police Officers' Union on Wednesday. Union president Doug Griffith disclosed a timeline of that early morning, explaining HPD's ShotSpotter gunfire detection system actually picked up the shooting in that area at about 3 a.m.

According to Griffith, who was on patrol in that area that night, officers responded immediately since the system notifies them that this was a "Priority 1" call. The initial officers, though, didn't see anyone in distress or find any casings, and since they didn't have an apartment number, they left.

Griffith added that the call regarding Arianna's shooting dropped later that morning as a "Priority 4" call, or delayed report. That's when HPD appeared at the scene.

"It's our belief that the call-takers may have made a mistake in how they coded that and our officers had no idea," Griffith told Eyewitness News.

Griffith added that more than 400 people in the department were out with COVID on that holiday, but every officer was required to come in if they could. He said they had close to 100 calls holding at any one point that night.

"We received a notification about 3 a.m. from our Shot Spotter technology of a discharge of firearms detected in the area of the 7000 block of Peerless Street, near Yellowstone Boulevard. Officers went to the area and searched for a scene. They happened to notice a large hole in fencing leading to the apartment complex at 3322 Yellowstone Boulevard. Officers walked through parts of the complex, but were not flagged down by any citizens and eventually left the location without observing a crime scene," Finner's statement read.

One detail that wasn't part of Griffith's account was addressed.

Finner continues, "Unbeknownst to them, the child had already been transported from an apartment in a private vehicle to the hospital within 3-4 minutes after the shooting occurred."

On the first-aid end of the response, Houston Fire Department told 13 Investigates' Ted Oberg that this particular incident came in as a shooting with HFD dispatched at 3:01 a.m. A crew was in route at 3:02 a.m., and was on scene at 3:06 a.m.

The fire department added that its average response time and travel over the past 365 days was five minutes and 26 seconds.

The overall response is also under investigation at the Houston Emergency Center.

Of course, in the midst of the internal investigation, police are still trying to find who opened fire on little Arianna and her family and why it happened.