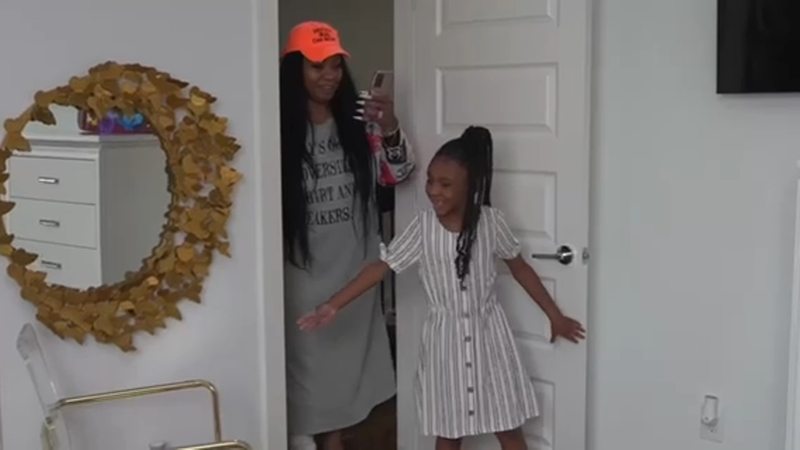 HOUSTON, Texas (KTRK) -- It has certainly been a long year for the family of George Floyd after they were thrown into the spotlight following the Minneapolis incident.

But it was Floyd's daughter who captured many hearts after proclaiming her dad "changed the world."

At just 7 years old, Gianna Floyd has endured so much grief.

A Houston interior designer told ABC13 that she was excited to be given the task to bring light and positivity to Gianna with a bedroom makeover.

Lauren Ashley of LA Weddings and Interior said the Floyd family found her on Instagram and reached out.

Ashley said it took her two months to design and create the new bedroom for Gianna, who was ultimately left speechless.

In the video above, take a glance at Gianna's full bedroom makeover reveal.

Her new room has been decked out with a custom mural and cozy furnishings, topped with a bubble chandelier.

Ashley said the project was more than a job, but a mission to help a little girl heal.

"Oh, my God. She's been through so much, and even what I did can't compare to anything, but I wanted to do as much as I can and make it as special as I could for her so she would have a place of peace that she would enjoy coming to," Ashley said. "It gave me peace to know that she enjoyed it, and she loved it as she walked through and got to see all the different things because it's a lot to take in with all the paint and the colors on the wall. Just to hear her say it's pretty and that she enjoyed it. I don't need anything else this year."

Ashley said one of the pillows was made in Gianna's honor, as part of the new collection by LA called Warm and Fuzzy.

Each pillow in the collection will be named after a significant woman who has had a positive influence on Ashley, the designer.

A portion of Gianna's pillow proceeds will be donated to the Gianna Floyd Trust Fund.