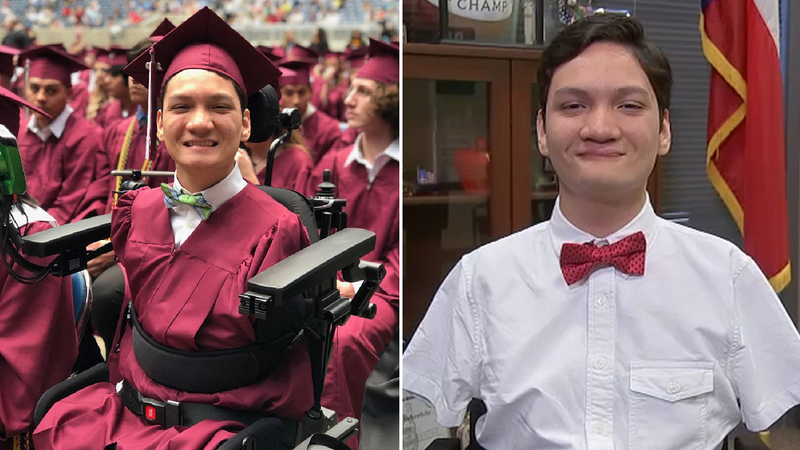 Pearland teen born without limbs wants to help others

PEARLAND, Texas (KTRK) -- Edgar Pacheco may have been born without arms or legs, but that's never held him back.

"I was born with Tetra-amelia, which signifies the absence of the four limbs," the 17-year-old Pearland High School graduate explained. "I believe that it was God's will that I was born that way."

Despite his disability, the teen was never limited in his academic accomplishments or his dreams.

"With regards to essays or long writing assignments, I use Dragon natural speaking," Pacheco said of his speech recognition assistant. "I dictate what I want to say into the computer and it appears on the word processor. I can type with a hard straw and type letter by letter. I tried to use styluses, but I didn't like them much because they were too short. So right now, I use a Starbucks coffee straw."

"I've always wanted to serve people," said Pacheco. "My dream has always been to get into the realm of government and public service, and hopefully, one day run for office."

Pacheco will attend San Jacinto College in the fall, but his ultimate plan is to transfer to the University of Houston to get a Bachelor's degree in political science, and eventually go to law school.

"I would like to work in Washington D.C. someday," said Pacheco. "The constitution has always interested me. If I do go into law, I would like to be a constitutional lawyer. I'm living to serve God and to serve people. I believe that everyone's purpose in this world is to serve."

His advice to others with disabilities is to take risks and never be afraid to try something.

"Many times, for people with disabilities such as me, it's hard to accept the way we are and it's hard to get out there, because we're afraid how people might judge us," said Pacheco. "But it's our duty to let them know, hey, we're not that different. We might have some extra challenges, but we're just like you. Take risks and know what you're living for."