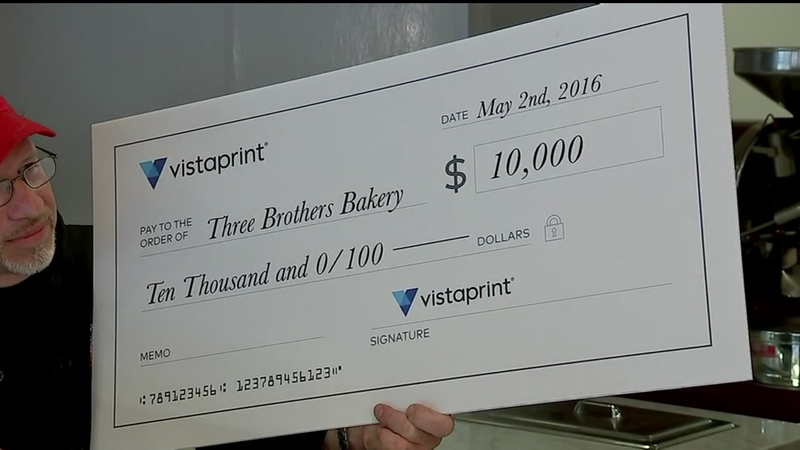 HOUSTON -- A Houston bakery was honored today on national television not for what it sells, but what it gives to feed those in need.

Three Brothers Bakery is a family-owned and -run business that donates about a thousand pounds of its baked good every week to Star of Hope Mission. From that, Star of Hope spokesman Scott Arthur says at least 800 portions are distributed at its shelters.

The recognition comes during Small Business Week. Arthur was contacted by Good Morning America and told the show was considering awarding the bakery a big check in recognition for its community giving.

"I told them we couldn't do it without them," Arthur said. "They've done so much on a regular basis and deserve anything you give them."

What Bobby Jucker and his family received today on GMA was a $10,000 check from VistaPrint.

Jucker was speechless on the air. He thought the appearance was because the bakery agreed to sell up to 3,500 pecan pies as part of the program's "Steals and Deals" feature.

For the Jucker family, it's personal. Bobby's father, who founded the bakery with his brothers, was a Holocaust survivor. He came to Houston in 1949 and started the bakery, and also started giving away baked goods to people in need.

He passed along the lesson he learned firsthand during the war about the toll of not having food on the human body and spirit.

From that, his son continues to give. "You can deal with being poor, not having money, but being hungry is so debilitating. It affects your entire life."

Rather than throwing away day-old items, Jucker delivers the baked-from-scratch bread, rolls, and sweet treats to Star of Hope, where they're frozen and later distributed to clients.

The bakery on Braeswood was closed for the past nine days after the flood. For the second time in less than a year, the building took on water. The store reopened today.

$10,000 might come in handy to pay for repairs, but Jucker said it will be reinvested back in charities the family supports, all of them connected to fighting hunger.