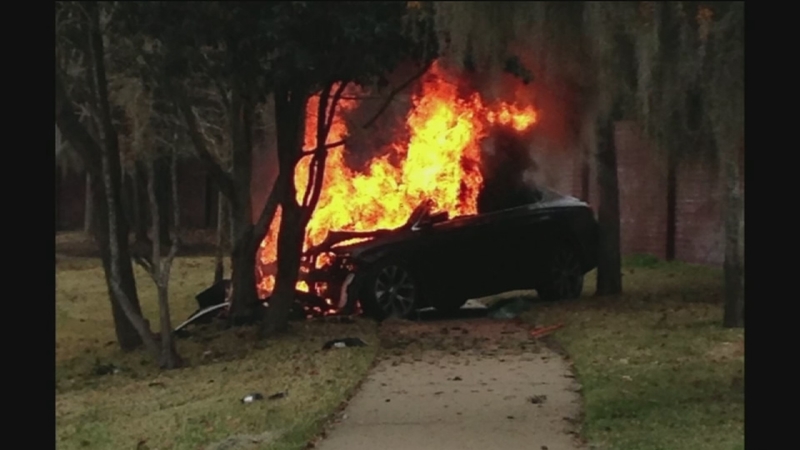 FORT BEND COUNTY, TX (KTRK) -- A driver is getting medical treatment after a fiery crash in the Greatwood area.

Witnesses say the driver, identified as Cathan Paul Kirkwood, was going southbound near Shadowbend Drive and Winding Brook West when he lost control for some unknown reason. The car then crashed into a tree and burst into flames.

Passersby and a crews working a brick fence stopped when they saw the crash and ran to help pull the driver out of the burning vehicle. At first, they tried to use a fire extinguisher and bricks to break the car's window, but when that didn't work, they used a sledgehammer from the crew's equipment to bash out the car's back window, which they used to get him out.

David Hollek, one of the good Samaritans, said, "(It was) scary. Surreal. ... He was hitting that fire extinguisher and the window just wouldn't give. I'm not sure if it was good safety or bad safety, because we couldn't get through the window and we couldn't get through the air bags. ... If these guys hadn't been here, I don't know how we would have had the manpower to get him out."

Rescuers didn't know how many people were inside the vehicle, the smoke too thick and inflated airbags too big to see inside.

The driver was alert, but in considerable pain when he was rushed to the hospital. There's no word on his condition or what may have cause the crash.

Jose Melendez, one of the bricklayers who used his sledgehammer to free the man, said, "For some reason we come over here to work. Now I understand now why."

Melendez says they were put on the scene as guardian angels to help a perfect stranger in his time of need.