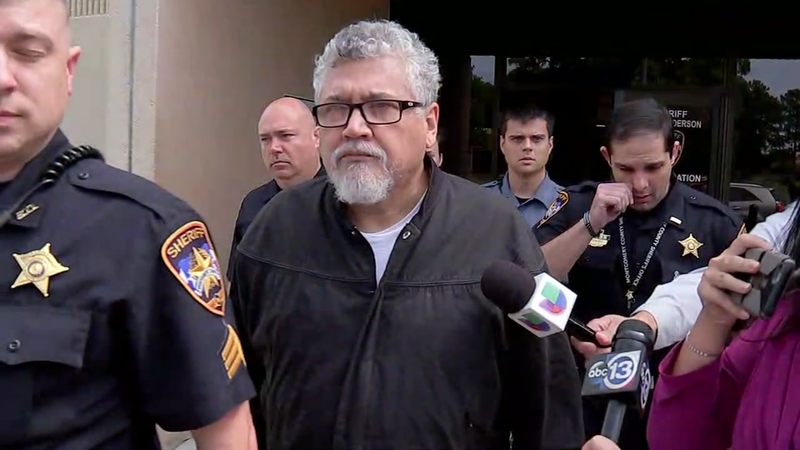 CONROE, Texas (KTRK) -- A Conroe priest who is accused of abusing two parishioners when they were teenagers bonded out of jail Thursday morning.

Father Manuel La Rosa-Lopez has been charged with four counts of indecency with a child.

La Rosa-Lopez was wearing an ankle monitor as he left jail. He did not answer any questions and climbed into a grey SUV that drove off.

Fr. Manuel, charged with indecency with a child, walks out of jail

He turned himself in to authorities at the Montgomery County Jail on Tuesday.

One of the alleged victims, who is only going by "Ann," spoke exclusively to ABC13 about coming forward about the alleged abuse, which happened nearly two decades ago.

Ann and another person were allegedly abused as teens in separate locations at the Sacred Heart Catholic Church in the late 1990s to early 2000s.

According to court documents, back in April 2000, Ann told her family Lopez had sexually abused her. In 2001, they told the church. Lopez was transferred, but no police report was ever made.

"I had a lot of guilt because I felt I was doing something wrong," she said. "I hated myself. I felt dirty and I was always terrified that if people find out about this, what are they going to think about me?"

Court documents say Ann reported the abuse to the church again in 2010, after discovering that Lopez was working at a church in Richmond.

Two weeks ago, she decided to file a police report when a friend advised her that the statute of limitations no longer applied.

Seeing the recent coverage of sex abuse claims by priests in Pennsylvania also compelled her to speak out.

"I'm disgusted. I'm disgusted that there is so much of this and so little action. I'm tired of all the empty words and reassurance we'll do all these things. It's not a very victim-friendly church," she told Eyewitness News.

Ann says she has a message for other victims, if they're out there: Don't be afraid to speak up.

"I'm just one voice and it's just one priest. If we don't all speak out, nothing is going to change. And that's very sad," she said.

Ann says she knows this is only the beginning, but she is ready to fight a battle that is long overdue.

"I would say to my 16-year-old self, 'It is not your fault and you are lovable,'" she said. "Because that is what I went so long without feeling."

The second alleged victim also filed a police report two weeks ago, claiming Lopez sexually abused him when he was young.

The Galveston/Houston Archdiocese provided ABC13 a detailed statement about the allegations.

These allegations also come as Cardinal Daniel DiNardo of the Archdiocese of Galveston-Houston meets with Pope Francis Thursday to talk about sexual abuse in the Catholic Church.

The meeting is part of a Vatican summit between the Pope and American bishops and cardinals.

A Conroe priest accused of abuse is expected to bond out of jail.