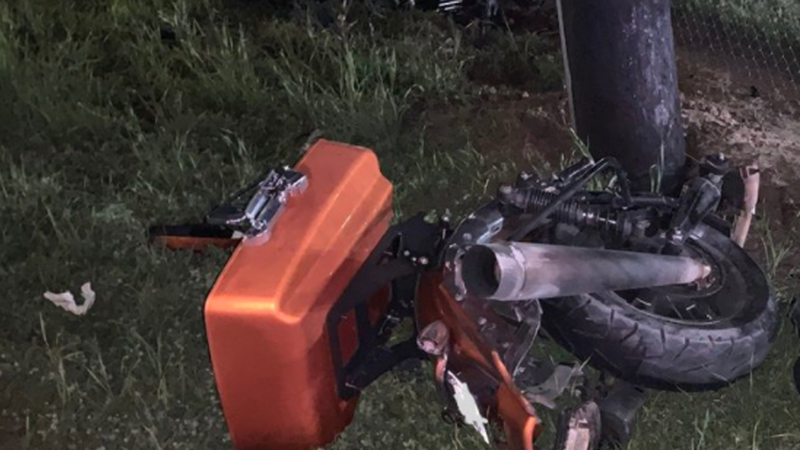 HARRIS COUNTY, Texas (KTRK) -- A motorcyclist died early Saturday in a crash with a vehicle along Beltway 8 in east Harris County, authorities said.

It happened around 1:30 a.m. on the Beltway near Tidwell.

The motorcyclist was southbound on the Beltway feeder when a Mazda 3 crossed several lanes in an attempt to turn into a driveway, according to the Harris County Sheriff's Office. The Mazda struck the motorcycle during the lane change, sending it into a curb before it crashed into a utility pole, deputies said.

The driver of the vehicle involved remained at the scene after it happened, according to the Harris County Sheriff's Office.

The motorcyclist, a 40-year-old man, died at the scene.

Deputies said they believe intoxication was a possible factor in the crash and arrested the Mazda's driver.

The crash was at least the third fatal collision in the Houston area this weekend. One person was killed in a crash on the Gulf Freeway near Sauer Street. Another person was killed Friday night in a deadly hit-and-run crash in northwest Harris County.
Report a correction or typo
Related topics:
houstonfatal crashmotorcycle accidentdui crashtraffic accident
Copyright © 2022 KTRK-TV. All Rights Reserved.
MOTORCYCLE ACCIDENT
Sergeant was to walk daughter down aisle until his hit-and-run death
Driver flees after motorcyclist killed in crash in Tomball area
1 dead, 2 injured after gunman in SUV fires shots at bikers
Motorcyclist killed in tollway onramp crash
TOP STORIES
51-year-old suspect in corporal's ambush killing on the run
Sergeant was to walk daughter down aisle until his hit-and-run death
Mom shares story of son's 'scary' battle with COVID complications
H-E-B's Scott McClelland retirement and what's next
Drying out, but staying cool this week
LULAC set to sue Houston City Council for lack of Hispanic members
New security director aims to improve safety for Jewish organizations
Show More
IRS changes you should know before submitting taxes
Cause of death revealed for 23-year-old woman found dead after date
Texas among states suing Google over claim it's misleading consumers
Man accused of stabbing K-9 in The Heights now charged
'We knew something big exploded': ABC13 recalls moment of Watson blast
More TOP STORIES News