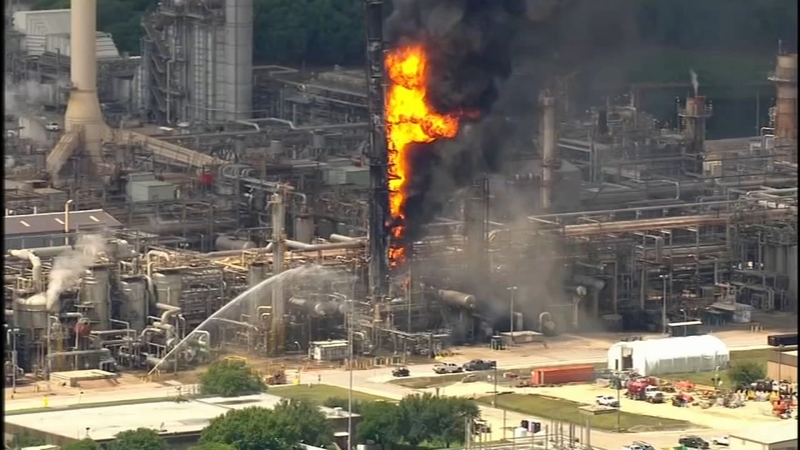 BAYTOWN, Texas (KTRK) -- Harris County is suing ExxonMobil over the explosion and fire at the company's Olefins Plant in Baytown on Wednesday.

The county's lawsuit alleges ExxonMobil violated the Texas Clean Air Act due to the release of pollutants.

ABC13 has reached out to to ExxonMobil for its response to the lawsuit.

The fire occurred at the facility off Highway 146 at Spur 330. The company said 66 people sought out treatment for non-life threatening injuries.

"People who live around here shouldn't have to put up with that," said Special Assistant County Attorney for Environmental Matters Rock Owens.

All workers are said to have been accounted for. None of those injured required hospitalization, according to ExxonMobil.

The company said Thursday that the fire has been extinguished, and all the workers who were evaluated have been cleared to return to work.

A statement said in part, "We deeply regret any disruption or inconvenience that this incident may have caused the community. The rest of the Baytown complex, including the refinery, are operating at reduced rates. The impacted unit has been shut down and stabilized. An investigation is under way into the cause of the fire, which burned propane and propylene. Our first priority is the safety of people in the community and in our facilities. Air monitoring continues in the area immediately outside of the complex and levels are normal."

ExxonMobil added that it is cooperating with regulatory agencies and is working to identify ways to enhance environmental performance.

Meanwhile, Baytown residents like Amanda Jimenez say they feel trapped. Jimenez says she is concerned about what's filling the skies over her home.

"Like I said, we can't do anything about it," said Jimenez. "It is what it is. It's Baytown. We don't know what's in those chemicals or in the air that we're breathing, or my children, what they're breathing."

Nelly Rivas says she grew up on the same block as the plant, and says no matter what state government or ExxonMobil says about the air quality, she's not convinced it's safe.

"My fears are for my mother mostly," said Rivas. "She lives here, she's diabetic, she's a senior, so, I'm just scared that she might end up having breathing problems."

A shelter-in-place was issued for residents who live west of the plant and south of TX-330, but was later lifted. Air monitoring didn't detect any levels of concern, according to the City of Baytown.

UPDATE: The Shelter in Place has been lifted. Air monitoring has NOT detected any levels of concern. Please RT.

ABC13's Nick Natario reports from a Baytown restaurant where patrons had to shelter-in-place amid the ExxonMobil fire response.

ExxonMobil's website states that the Baytown Olefins plant began operations in 1979 and is one of the largest ethylene plants in the world.

ExxonMobil recently completed the construction of a multi-billion dollar ethane cracker at the Olefins Plant. ExxonMobil says the cracker has a capacity of 1.5 million tons per year and provides ethylene feedstock to two new high-performance polyethylene lines at the Mont Belvieu Plastics Plant, which was built in 1982. The projects were part of ExxonMobil's 10-year, $20 billion Growing the Gulf expansion program.

This is the second time within a few months that a fire has broken out at an ExxonMobil plant. That previous incident occurred in March.

READ MORE: Officials investigating cause of fire at ExxonMobil refinery in Baytown
Report a correction or typo
Related topics:
baytownfireexxonmobil
Copyright © 2022 KTRK-TV. All Rights Reserved.
TOP STORIES
Daylight shows home destroyed after standoff with shooting suspect
What we know about man accused of shooting 3 HPD officers
Suspect arrested after 30-minute chase ends on I-45 in Texas City
Clouds clearing today, sunny through the weekend with rain next week
5 people charged in connection with Pct. 5 corporal's murder
How many times can I reuse my N95 mask?
Decades after TV anchor disappears, convicted rapist denies connection
Show More
Driver dies after slamming into 18-wheeler's trailer on US-59
Woman shot in the shoulder during robbery set up in SW Houston
Prepare for a major closure at I-69 and 610 West Loop this weekend
Officers escort body of corporal killed in ambush to funeral home
ABC13 obtains HPD scanner traffic of chase that led to shootout
More TOP STORIES News