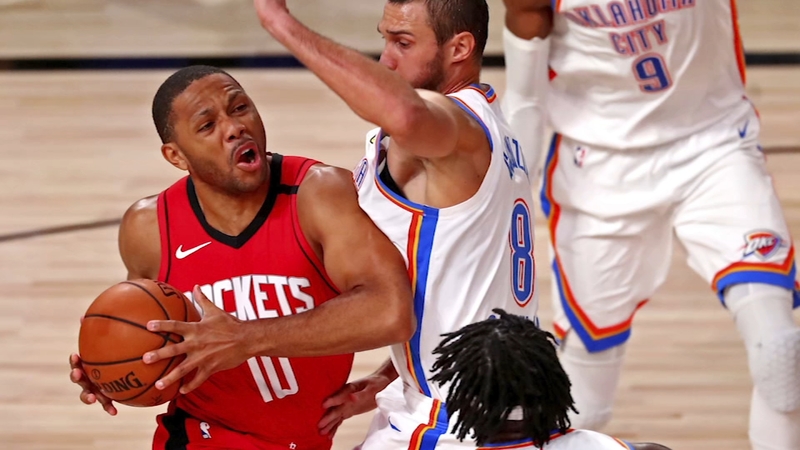 The Oklahoma City Thunder won in Game 3 against the Houston Rockets with a score of 107-119. James Harden fouled out for the first time of the season with six fouls. Things got heated in OT after Mike D'Antoni demanded Chris Paul's offense foul be called. D'Antoni received a technical foul.

In the aftermath of a series-opening loss to the Houston Rockets and in advance of a different approach that yielded the same result in Game 2, Oklahoma City guard Chris Paul shared strategies that seemed viable and likely to set the Thunder on a winning path.

"I think we definitely got to find Steve-O a lot more," Paul said of 6-foot-11, 265-pound center Steven Adams, whose size and heft leave the small-ball Rockets with precious few options to stymie his rampaging.

"And we've got to play with a better pace, get the ball up the court quicker."

The Thunder failed on all accounts.

Adams and Gallinari were less productive in Game 2 compared to the opener, with Adams regressing from a double-double (17 points, 12 rebounds on Tuesday) to a quiet eight points and 11 boards in Game 2 while Gallinari had his scoring output slashed a dozen points, from 29 to 17.

Now, with the Thunder in an 0-2 hole with Game 3 set for Saturday near Orlando, another truth has crystalized for Paul.

After amassing a largely hollow 20-point, 10-rebound, nine-assist stat line in the opener, Paul recorded a minus-36 rating on Thursday. The Thunder have myriad shortcomings to correct if they plan to shift series momentum, but Paul is their linchpin, and it is difficult to envision a scenario of Oklahoma City achievement that doesn't feature Paul as integral to it.

"I gotta do more, straight up. It's that simple," Paul said.

"I gotta be better. I think that's the tough part to know how hard we've fought, guys have worked hard. We put ourselves in position to win that game (Thursday) and I've got to be better for us."

Oklahoma City does have a modest history on its side in terms of a potential Game 3 turnaround. The Thunder have won Game 3 in each of the five previous instances in which they fell into an 0-2 series hole, even rallying to take the 2012 Western Conference Finals against San Antonio.

This season, the Thunder cultivated a reputation for rallying against sizable odds. If they aim to give the Rockets a push, they had better call upon whatever toughness that fostered such a rep.

The Rockets have excelled in equal measure by defending with unexpected verve and getting production from a bench unit that struggled with consistency throughout the season.

Houston appeared vulnerable when All-Star guard Russell Westbrook was lost to a strained right quad but has responded with an egalitarian approach offensively.

Defensively the Rockets have limited Oklahoma City to 44.2 percent shooting by rotating with determination. Westbrook will miss Game 3, but if the Rockets keep defending with the same raging intensity that defined their first two series efforts, his absence will remain a non-factor.

"When we're not making shots we've got to find ways to win, and I keep saying it's going to be on the defensive end," Rockets guard James Harden said.

"When we're making shots our swag is way crazier, but I think our swag is even better when we're not because we've got to guard and defend and be on the same page defensively."