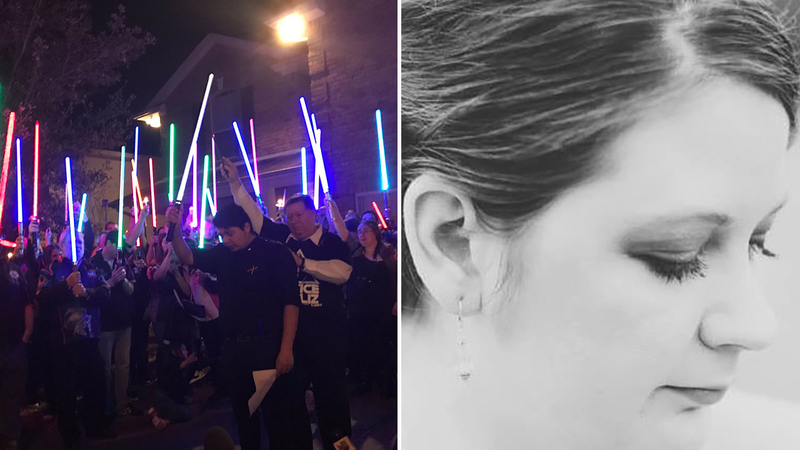 TOMBALL, Texas (KTRK) -- Friends and family raised light sabers and released a sky lantern for a Star Wars fan who was gunned down last week in her driveway near Tomball.

Elizabeth "Liz" Barraza, 29, was shot four times on Jan. 25 as she was setting up for a garage sale. A neighbor's security camera captured the shooting and the killer running away. Another caught the shooter's truck as it left the scene in the 8600 block of Cedar Walk in the Klein Meadows neighborhood.

Friday night, the driveway where it happened was overflowing with friends, family and neighbors, and for the first time, the victim's father and husband spoke publicly.

"The important thing is to focus on justice for Liz," said Bob Nuelle, Barraza's father.

Nuelle told the crowd his daughter was an organ donor who, in death, helped four people. Many in attendance came with wands or light sabers. Barraza was a big Harry Potter and Star Wars fan. In life, she sometimes channeled a Storm Trooper for charity and smiles. She was a member of the local 501st Legion.

"My daughter, Liz, spent her life healing and spreading love and cheer to all of those around her, even total strangers," said Nuelle.

"She was just amazing, just selfless. She loved everyone," said Allie Harper, a childhood friend.

No one has been arrested. The Harris County Sheriff's Office and her family continue to appeal for information.

"We need justice for Liz because we don't understand why" said Sergio Barraza, her husband.

He had just left for work the morning Barraza was shot.

"If only I knew it would be our last moments together," he said through tears.

Barraza implored the crowd to raise their wands and light sabers for his wife before a sky lantern was released.

The family is raising money to add to the existing Crime Stoppers reward.

Anyone with information is urged to call the Harris County Sheriff's Office Homicide Unit or Crime Stoppers.

MOVING VIGIL: Liz Barraza was a huge Star Wars fan. Tonight friends and family lifted their light sabers in her honor. She was shot to death in her driveway a week ago today. No one has been arrested. https://t.co/2AqW6NmN9q #abc13 pic.twitter.com/0YteRYralk