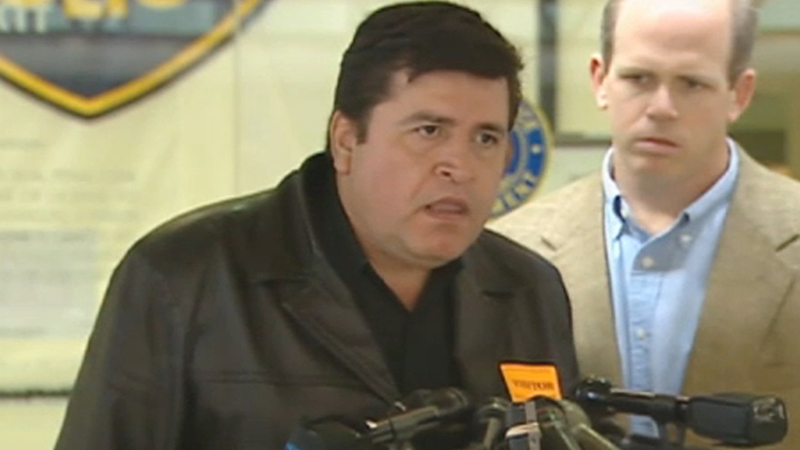 HOUSTON, Texas (KTRK) -- A former Houston Police Department captain accused of running a man off the road and pointing a gun at his head in an effort to prove false election claims has been indicted.

A Harris County jury indicted Mark Aguirre Tuesday for aggravated assault with a deadly weapon in the case.

The second-degree felony is punishable by up to 20 years in prison.

According to court documents, Aguirre told police that he was part of a group of private citizens called the "Liberty Center," who were conducting a civilian investigation into the alleged ballot scheme.

Aguirre said he had been conducting surveillance for four days on AC repairman David Lopez Zuniga because Aguirre thought Zuniga was somehow the mastermind of a giant voter fraud scheme.

Aguirre told authorities the man was hiding 750,000 fraudulent ballots in a truck he was driving.

On Oct. 19, Aguirre allegedly ran his SUV into the back of the truck to get Zuniga to stop and get out.
When Zuniga got out of the truck, Aguirre pointed a handgun at him, forced him to the ground and put his knee on his back until police came, the court document said.

At the time of the alleged crime, Aguirre was working as a contract investigator for conservative activist Steven Hotze. Hotze has made a name for himself for alleging widespread voter fraud in Harris County, even when none has been found.

Last fall, Hotze used the "Liberty Center" funds to hire around 20 private investigators and other workers to investigate incidents of alleged fraud.

"We paid our investigators closer to $300,000," said Hotze during an hour long news conference at the time. Hotze and his attorney, Jared Woodfill, spent most of the time rehashing their allegations of massive voter fraud.

It was determined that no ballots were in Zuniga's truck.

According to Tuesday's indictment, Aguirre never told police that he had been paid a total of $266,400 by Liberty Center, $211,400 of which was deposited into his account the day after the alleged incident.