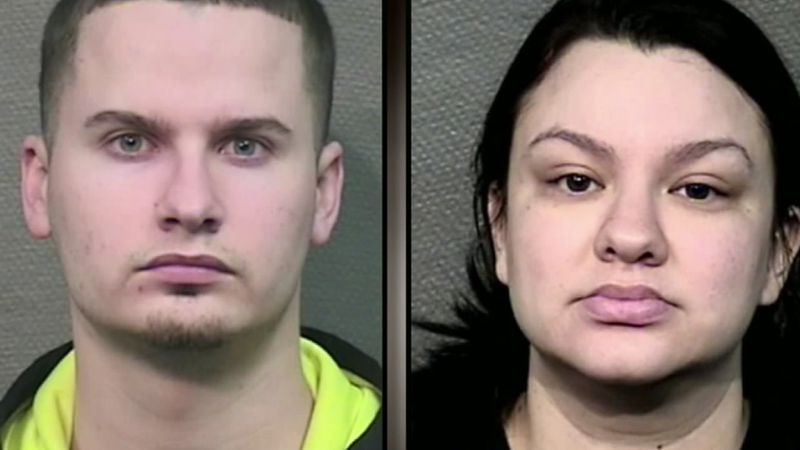 HOUSTON, Texas (KTRK) -- A mother charged for not protecting her baby from an allegedly violent father reportedly told police "love takes over and you just brush it under the rug."

Aeriel Spivey, 26, is charged with injury to a child by omission. The baby's father, Dylan Daugherty, 23, is charged with felony murder. According to Houston police, 7-week-old Brooklyn Daugherty was found unresponsive by her parents on June 5, 2018, at their apartment in Clear Lake.

On Thursday afternoon, Spivey and Daugherty made their first court appearance and heard the long and disturbing list of their daughter's injuries.

"Blunt head trauma consisting of scalp and facial contusions. Skull fractures, over 60 rib fractures in various stages of healing. A broken arm, a broken leg, a broken pelvis and a variety of other injuries which occurred over at least three separate traumatic events," a prosecutor told the court.

Last June, Brooklyn's obituary read that she passed away "peacefully."

During interviews with Houston police, Spivey told them she was concerned about the bruises she saw but did nothing.

At one point, Spivey told the officer, "I had been thinking for a few weeks he had been hurting her," and followed by saying, "of course love takes over and you just brush it under the rug," said the prosecutor.

"I didn't do anything," the prosecutor read from Daugherty's statement. "But claimed Aeriel was not responsible for the injuries or the death of Brooklyn."

Daugherty and Spivey remain jailed Thursday night. Spivey's three other children from a previous marriage are with their father, according to CPS.