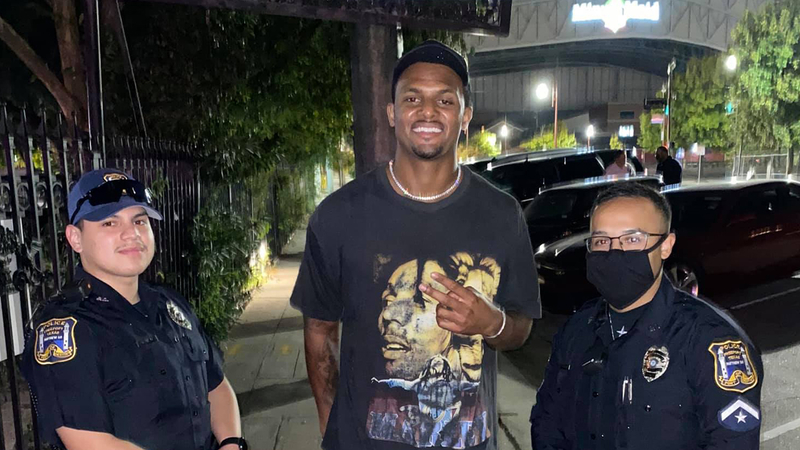 HOUSTON, Texas (KTRK) -- Houston Texans quarterback Deshaun Watson was out and about Wednesday night, pausing for a photo with Freeport police officers.

The Freeport Police Department shared on its Facebook page that Officers Hinojosa and Treto met the star QB while working an off-duty job.

"Thank you Deshaun for taking a minute to take a photo with two of Freeport PD's finest," the caption said.

The photo was taken in front of the Irma's parking lot sign. Minute Maid Park can be seen shining in the background.

But what was Watson doing out? Well, we don't have that answer.

We don't know if his plans included Irma's, but a quick check of the restaurant's Facebook page shows it has been closed since Nov. 1 because "big things are coming."

The restaurant was supposed to reopen Thursday, but that was pushed back until Friday.

Whatever the reason Watson was strolling through the downtown area, he made smiling with the officers an important part of the stop.

And it looks like they caught him just in time, too.

The Texans will be leaving town to travel to Jacksonville, Florida, where they'll take on the Jaguars this Sunday.

"We just want you to know we love you very much," his family told him.

You need to watch this fan's reaction when he saw Deshaun Watson riding through downtown Houston.