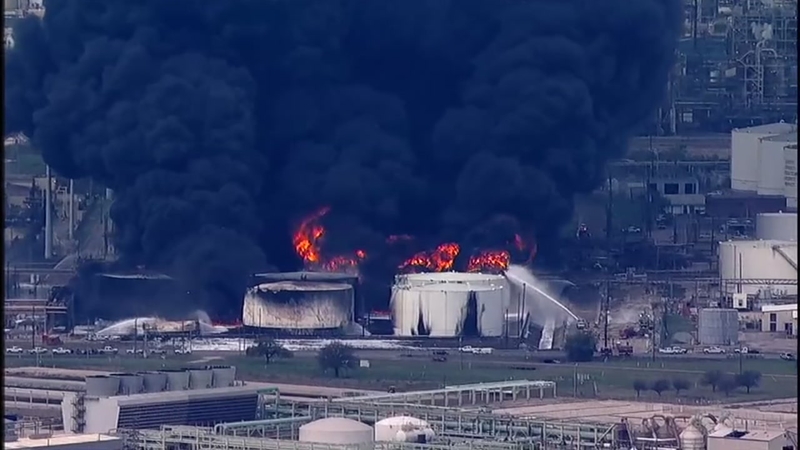 No drinking water affected as ITC cleans up spill

DEER PARK, Texas (KTRK) -- The Houston Ship Channel has reopened, but only during daylight hours, after being shut down for nearly a week due to chemicals leaking into the water from the tank fire at the ITC Deer Park facility.

During ITC's update on the cleanup efforts Thursday, Capt. Kevin Oditt with the U.S. Coast Guard said that a wind shift did cause some pockets of oil to escape some of the boom to contain the spill. They are currently reassigning skimming vessels to accommodate for that.

The oil moved west toward the Beltway 8 bridge but is expected to stay in the area between the bridge and the Lynchburg Ferry, Oditt said.

There are no known or suspected impacts to the drinking water, Harris County officials said.

The Texas Department of State Health Services still has a fish consumption advisory for the upper Houston Ship Channel, recommending you don't eat any species of fish or crab from that water. The advisory also includes the San Jacinto River north of SH-146 Fred Hartman Bridge.

About 35 percent of the normal traffic is currently getting through. Each vessel passing through the contamination zone has to be visually inspected.

There is still no time frame on when the Ship Channel will fully reopen.

No dangerous levels of benzene were detected overnight, officials added.

The Environmental Protection Agency and ITC said that the situation at the tank farm continues to grow more stable each day. One thousand personnel are also working on the cleanup and recovery effort.

Wednesday night, 4,100 barrels of oil and gas product were recovered by the Coast Guard, bringing the total to nearly 12,000 barrels recovered from the Ship Channel.

The area they're working in includes sensitive marshes. Thirteen fish, a frog and a turtle were found dead in Tucker Bayou.

After the initial fire on March 17, more tanks caught fire releasing air contaminants, and causing school districts in the area to cancel classes.

That included Deer Park ISD, which said students will not have to make up the four days lost last week.

The Texas Education Agency excused two of the days. The district was able to use extra minutes built into the calendar to cover the others.

La Porte ISD also will not have to make up days.

Meanwhile, the president and CEO of ITC, Bernt Netland, is talking to the public for the first time since the fire broke out.

He posted a message on YouTube, apologizing for the impact on the community.

"All of us are profoundly upset the incident happened and very sorry for its impact on the surrounding communities," Netland said.

"I want to thank all the first responders. I also want to thank the many members of the local, state, and federal agencies who are here under the unified command. The professionalism of all these individuals is outstanding," Netland continued.

ITC's incident commander Brent Weber responded to Netland's apology when asked about it during a press conference.

"I know my CEO. I know his character. I can assure you that he is sincere, he's genuine, and when he speaks, he speaks from the heart," Weber said. "I'm proud to work for Mr. Netland, and I'm proud that he's my CEO."

ITC is facing a number of lawsuits, including one by Harris County.

A law firm is holding a town hall in Deer Park Thursday at 6 p.m. to talk to those affected by the fire and the ongoing recovery effort.

That event will be held at St. Hyacinth Catholic Church.

Another 70,000 barrels of product needs to be pumped from damaged tanks to more secure ones. The next priority is to remove the gas blend.

The following parks are still closed until further notice:

BAYTOWN: The City of Baytown reports, based on preliminary results from TCEQ and the Galveston Bay Foundation Water Sampling, the Baytown Nature Center will now be open.