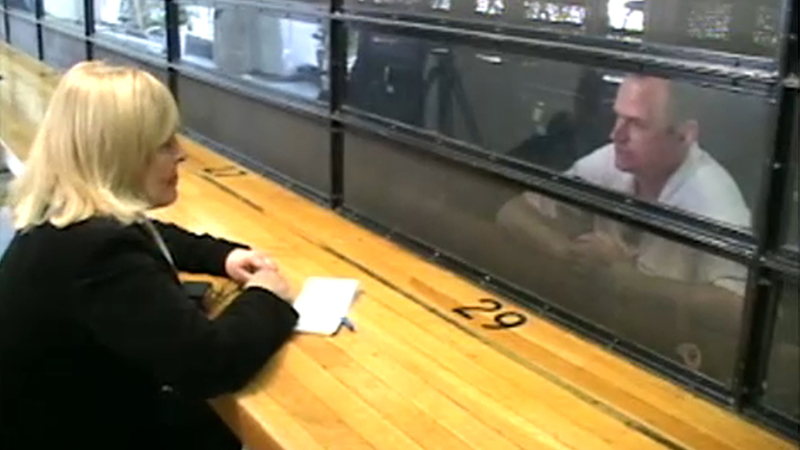 HOUSTON, Texas (KTRK) -- On a July day in 2006, Deborah Wrigley found herself standing in line with an alleged bank robber.

She kept her cool -- and not only got the story but also helped police.

"I intended to make a quick trip to this bank in Houston, and instead ended up in the middle of a robbery," Wrigley said in her on-air report at the time.

RELATED: Deborah Wrigley honored by Mayor Turner as she celebrates 42 years at ABC13

Wrigley was in the bank and said she watched the man next to her, then-39-year-old Ralston Froman, push a note in front of the teller and say in a low voice, "It's not worth your life."

Froman didn't seem to notice there was a witness next to him, so she moved out of line and quietly left the bank.

"He's focused on what he's doing and not paying attention to what's going on behind him," said Sgt. J.B. Whitely of the FBI Bank Robbery Task Force.

Froman also failed to notice that Wrigley and her photographer, Johnny Marquez, were following him in a car.

"We were on the phone with 911, tracking the suspect as he drove almost leisurely in the area," Wrigley said. "Within 10 minutes, police had caught up with us."

Guns drawn, police pulled Froman from his car. He did not have a weapon.

He did have an ice chest containing the bank's cash and the holdup note, which threatened to kill the bank teller and her family.

He told police that he had no idea how he had been caught and that he didn't want to talk about it, either.

"No comment, man," Froman said as he was being put into a squad car.

Froman was sentenced to 25 years in prison for the robbery, where Wrigley caught up with him a year later.

"I remember you intervening and probably saving my life," Froman said in 2007.

Froman said he was on drugs when he held up the bank. He said he'd been using after injuring his back.

He'd been in prison before for robbing a pharmacy, but had been sober for three years after his release.

He went on to culinary school and thought his life was saved at the time.

After the 2006 robbery and conviction, he saw his latest time in prison as another chance at redemption.