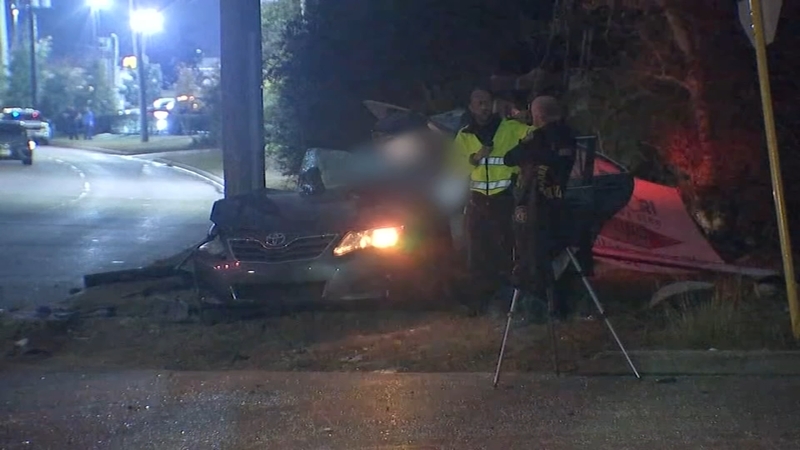 HARRIS COUNTY, Texas (KTRK) -- A 12-year-old girl is the only survivor in a horrific crash that killed both her father and grandmother Sunday night.

The crash happened just after 9 p.m. Sunday in the 10800 block of North Gessner at Loyal Pointe.

"We didn't know what happened to Johnny or Julie, or if Johnny was even in the car," said Wade Zollinger, a cousin who shares a duplex with the family.

The Harris County Sheriff's Office confirmed 57-year-old, Julia Moore, was driving a Toyota Corolla northbound on North Gessner, with her granddaughter in the passenger seat. Family members said the girl's dad, John Wurts, was in the backseat.

Zollinger says Moore and her granddaughter had gone to pick up Wurts from his job and were driving home when the crash happened.

Moore attempted to turn left onto Windfern Road when deputies said the Corolla's passenger side was hit by a Dodge Ram 3500 licensed Harris County tow truck.

Last night, at about 9:15pm, a double fatality collision occurred at 10800 N. Gessner Rd. A tow truck and a sedan collided. The tow truck driver (29), hospitalized in stable condition, sustained minor injuries. The driver of the sedan, a female (57), was pronounced deceased (1/2) pic.twitter.com/S53Fa9zMnn

Deputies at the scene said it appeared that the tow truck driver was speeding as he drove southbound on North Gessner.

The 29-year-old tow truck driver was taken to the hospital in stable condition, deputies said. He sustained minor injuries.
Investigators with the Harris County District Attorney's Office say they need to reconstruct the accident and determine how fast both drivers were going before any charges can be filed.

The tow truck driver did not show any signs of intoxication.

Zollinger says his family understands that the investigation may take some time. For now, they are focused on the recovery of the young girl, and mourning the loss of Moore and Wurts.

Avoid the intersection of Gessner and Loyel Point dr. The road will be closed while accident investigators collect evidence pertaining to a fatal accident. Please pray for the families that will be affected as well as the child that was flown to Herman. @HCSO_PSSB @HCSOTexas pic.twitter.com/1yW8ugVf8X