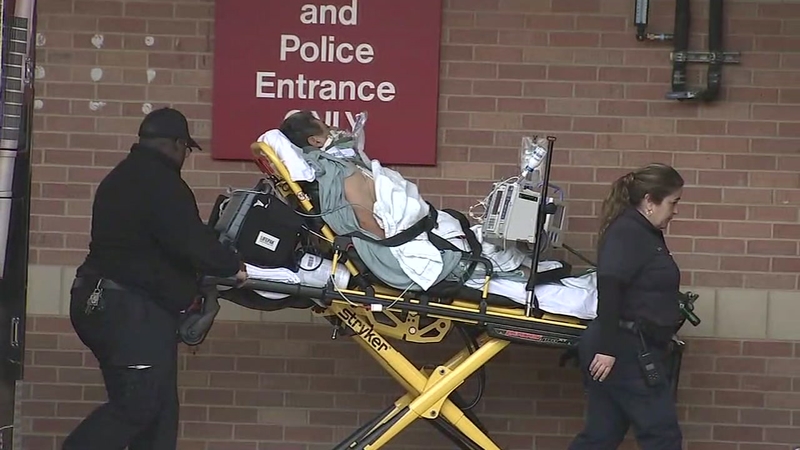 Deputy, 2 officers in hospital after shootout with felon

The suspected shooter, Daniel Trevino, was found dead Tuesday of an apparent self-inflicted gunshot wound inside the home on Hartwick Road after an hours-long standoff.

The Texas Attorney General is asking all Texans to pray for the injured, including two officers from Ken Paxton's office, following a violent confrontation caught on camera.

Family members identified the Harris County Sheriff's deputy who was shot as James Robert Smejkal III, a 29-year veteran with the agency.

A witness captured dramatic video of the moments shots were fired just as a standoff began in northeast Harris County.

You can hear the labored breathing of an eyewitness on that video, watching and living through the heart-racing moments of the SWAT standoff.

You can see what appears to be lawmen huddled behind a black car. Seconds later, a frantic call for help goes out.

Gunfire erupts, then yelling before the eyewitness makes a desperate dash to safety.

Two deputies injured in shooting while serving a warrant in the 5100 block of Hartwick Road.

Our news crews were right there on the ground, capturing powerful images as paramedics rushed one of the injured officers to the hospital.

"One of them was shot in the foot," said Major Mike Lee, of the Harris County Sheriff's Office. "The other agent was shot numerous times, torso, leg and face."

At the hospital with injured deputy. He’s in good spirits, surrounded by friends and family. Our second injured deputy has been released. A collective sigh of relief for our @HCSOTexas family and community. Wishing them a full and speedy recovery. #hounews

Update on Hartwick Rd: All three injured officers are awake and alert. Expected to survive their injuries. Thank you all for your prayers.

Another deputy was injured in a motorcycle crash while on the way to assist at the scene, but has since been released from the hospital.

"We feel blessed that they're going to be okay," Lee said.

Texas' Attorney General released this statement Tuesday night:
"This afternoon, Captain Wes Hensley and Sergeant Mark Rychen from the Fugitive Apprehension Unit in my office were shot and wounded while serving an arrest warrant on a suspect in Northeast Harris County. A deputy from the Harris County Sheriff's Department was also shot. These brave and courageous law enforcement officers were fulfilling their call to duty to apprehend a known criminal with a dangerous past. Thankfully, all of the injured law enforcement officers appear to be recovering well this evening. I'm asking all Texans tonight to pray for those recovering, their families, and all the men and women in law enforcement who face unpredictable dangers each day to keep Texans safe."