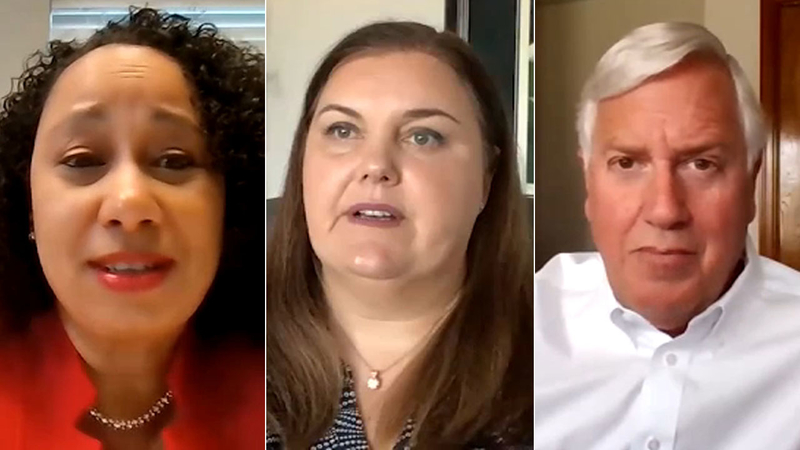 HOUSTON, Texas (KTRK) -- Monday, Dec. 13 was the deadline for filing to run for office next year in Texas, and there was a last-minute addition to the lieutenant governor's race.

Carla Brailey is the latest candidate for that race, joining two other Democrats in their bid to unseat incumbent, Lt. Gov. Dan Patrick.

Brailey is a professor at Texas Southern University and the vice chair of the Texas Democratic Party.

"Our democracy is at stake in this election," Brailey told ABC13 after filing for the race. "(The campaign's) priorities are going to be education. We're going to talk about rights. It's not just voting rights. It's civil rights. It's women's rights."

She joins another woman already in the race. State Rep. Michelle Beckley, D-Carrollton, is running, vowing to bring balance back to the Texas Legislature.

Both are up against Kingwood's Mike Collier. He ran against Patrick in 2018 and came within five percentage points. He was also the first to announce his run this time around.

"We've been about 7,000 miles (that) we've put on the pickup truck," Collier said. "The job of a candidate is to go out and earn everyone's trust, take nothing for granted. We've been out across the whole state. We feel very good about our prospects."

There was a fourth candidate in Matthew Dowd. The former GOP strategist's campaign was short-lived when he dropped out last week, citing a need for more diversity in the field.

And so, it is a three-way race for the Democratic nomination, with the winner facing the formidable Patrick.

Eyewitness News reached out to his campaign Monday, and he was unavailable for an interview for this report. He has governed a Republican majority in the Texas Senate.

Though he wasn't available, he has consistently said Texans are concerned about their property taxes and schools, while championing social issues that resonate with conservatives.

All three of the Democrats say Patrick's priorities don't represent what Texans want despite his winning the office twice after success as a state senator.

"When I run around the state, that's what folks want in a lieutenant governor," Collier said of his approach. "Somebody who would set the agenda to solve the real problems, like fixing the damn (power) grid, like being honest about fixing the property tax problem, like funding public education."

Beckley has a similar take on the way to approach governance.

"We're not paying attention to the everyday things that affect lives," she said. "Property taxes, fixing our grid, making sure schools have everything they need."

The primary election is less than four months away.