Child Protective Services confirmed the video was taken in April 2021, at their Royalwood Church Child Without Placement facility.
KTRK
By Brooke Taylor 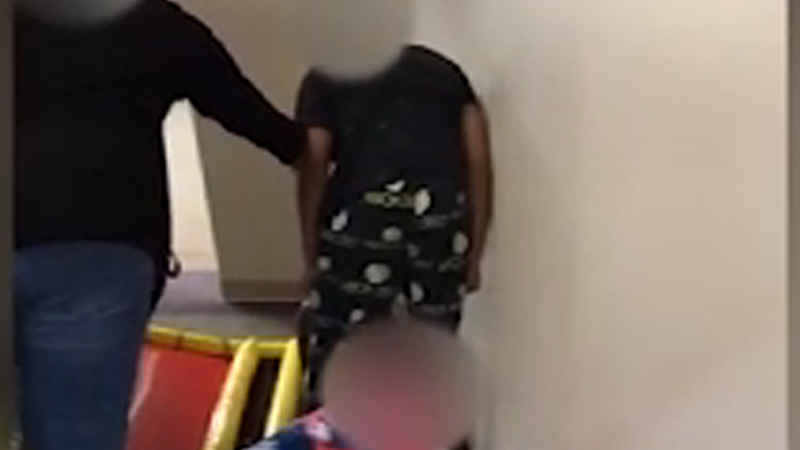 HOUSTON, Texas (KTRK) -- A disturbing video shows a boy standing over a girl, kicking and punching her while under CPS care. As she screams for help, a CPS worker is seen watching the attack but not intervening.

Child Protective Services confirms the video was taken in April 2021, at one of their Child Without Placement (CWOP) facilities.

"I was very disturbed when I watched the video," said Dr. Candice Matthews, Texas Statewide Steering Committee Chair with the Rainbow Push Coalition. Matthews released the video after a CPS worker recorded it and sent it to her to expose the unsafe conditions both foster kids and workers are facing.

The state uses CWOP as a last resort for children and young teens who can't be placed, leaving many children in the state's care to sleep in offices, motels, or, in this case, a church instead of a licensed facility.

One of the major issues with that means there are no workers who are trained to de-escalate situations that include kids or staff members being assaulted. Under policy, CPS workers can't restrain anyone because of this.

"When the worker brought this to me, she had concerns like we do. Because one, you are not trained to deal with high-risk children," Matthews said. "That's why she's just standing there."

A federal judge told the state it needs better solutions to fix its foster care crisis, which has left children sleeping in state offices and motels.

While the number is down, it still means more than 200 kids are in places without specifically trained caseworkers to intervene. As of Friday, Dec. 3, there were 10 foster youth in CPS offices across the state, along with 92 others in alternative locations, including with foster care providers, in foster homes, and in hotels.

Members of the Texas State Employees Union (TSEU) are demanding Gov. Greg Abbott and state leaders take immediate action and hire and train staff for kids who can't be placed.

Meanwhile, the federal court has forced CPS to negotiate a solution to these issues in an ongoing legal battle. A progress report is due next week.

The main reason children who can't be placed are living under these circumstances is capacity issues and not enough providers.

SEE ALSO: 13 Investigates: Teen shot after sneaking out, another 'sleeping off a hangover' under CPS's care
EMBED More News Videos

Despite court orders to stop children from living in CPS offices, the state is still shuffling kids from one unlicensed facility to the next, including hotels, motels or government offices.

According to Marissa Gonzalez, Media Relations Director, since June 1, CPS has developed 46 new "sub-acute beds," which are for foster children and young people coming out of psychiatric hospitals, who usually end up in CWOP because of capacity for kids with their specific needs.

Since June, Gonzalez said they have developed 138 new licensed, permanent capacity beds for children and young people in foster care who have high needs.

A spokesperson for CPS sent ABC13 the following statement:

We can confirm this took place in April at Royalwood church during supervision of youth without placement.

Child safety is DFPS' top concern for Children Without Placement (CWOP), as well as the security of DFPS staff. The number of CWOP who are staying in alternate locations is declining, down from 416 in July to 236 in November. Work continues non-stop to find solution for CWOP and the number one message for DFPS staff from Commissioner Masters is, "I HEAR YOU and CWOP is and has been my number one priority. We have to fix this for the children and youth in care, obviously, but also for our employees who are literally working 24 hours a day to staff CWOP."

As of Friday Dec. 3, there were only 10 foster youth in CPS offices across the state, along with 92 others in alternative locations including with foster care providers, in foster homes, and in hotels.
Since June 1, we have developed 46 new "sub-acute" beds - these are for foster children and young people coming out of psychiatric hospitals, who usually will end up in CWOP because of the lack of capacity for kids with their specific needs.

On Sept. 30, CPS completed a detailed history and summary of every child that is currently in CWOP. Each region will hold a "drill down" meeting with the youth and everyone involved in his/her care, caseworkers, placement team members, and other stakeholders in the case, such as CASA and the child's attorney ad litem. During these focused meetings, placement options will be discussed with the youth to determine goals, find family members, and identify connections with other adults.

During the second Special Session, the Texas Legislature appropriated $90 million to provide rate increases and flexible funding to increase capacity; this is in addition to the $55 million appropriated by the Legislature in the regular session.

One of Commissioner Masters' priorities has been to ensure that all children in Texas are protected - but DFPS must use more caution and common sense when deciding if a child is removed into state custody due to extreme abuse or neglect. To support that effort, if investigators want to remove a child at least 12 or older, the director of that geographical region must approve.