Couple killed in front of home as they returned from hospital in N. Harris County 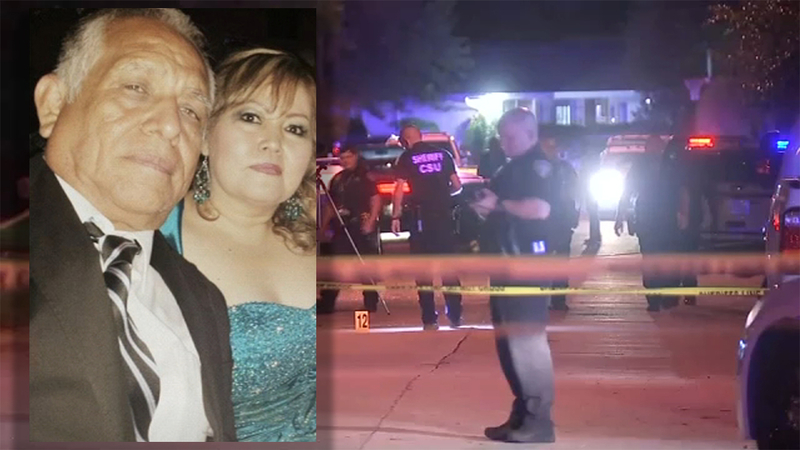 Couple killed in front of home as they returned from hospital

Detectives are looking for whoever gunned down a husband and wife in their 60s in front of their home Wednesday morning in north Harris County.

Family members say Ramiro Reyes and Rosalba Reyes had just returned from the hospital around 1:30 a.m. following the death of Rosabla's mother. Officials believe the loved one was the mother of one of the victims.

The family of Ramiro and Rosalba Reyes gave us this picture of them. The couple, married for more than 40 years, were shot and killed outside their home in NW Harris Co. Police are looking for their killers. https://t.co/sx2YGlR0Y1 @abc13houston pic.twitter.com/0i3ejlM5js

According to deputies, Ramiro and Rosalba were in separate vehicles when someone in another car opened fire as they pulled up to their home in the 1100 block of Francitas Drive.

The shots initially came from around the corner, then the shooter drove closer and opened fire again. Deputies say that particular part of Francitas Drive is a loop and believe the suspect or suspects drove around that loop at least once.

The couple's son-in-law, Adrian Villareal, stepped outside to see what was happening and was also shot.

Villareal was taken to Northwest Houston Hospital, where he underwent surgery. He's expected to survive.

Rosalba was in the car with her sister and niece, who were not injured.

Family members of the murder victims are in shock over the senseless violence #abc13eyewitness pic.twitter.com/x3nbH2Ac0R

"We never thought this would happen to a family member. It's really sad, it's tragic, it's horrible," their niece Irene Rodriguez said.

"They were great people. They didn't have any enemies," nephew Sebastian Rodriguez said.

The family members said they remember Ramiro's great stories and how he would take them on trips to Mexico. They described Rosalba as a sweet woman.

Ramiro was retired. Rosalba was recently released from the hospital for her own illness. They were married for 40 years and leave behind one child.

Right now, officials don't know who killed them or why.
"Could be anything from road rage to mistaken identity. We have no indication the victims were involved in anything that could've precipitated this event," said HCSO Lt. Bobby Minchew.

Detectives say dozens of shots were fired at the couple. At least two cars down the street from their home have shattered windows. A house was hit three times by stray bullets.

Officials told ABC13 they don't have a description of the suspects or the car used in the shooting.

"We really just don't know who we are looking for," HCSO Sheriff Ed Gonzalez said. "This individual or individuals are still out there and if they did it now, they could do it again."

Officers are asking neighbors to check their surveillance cameras.

If you know anything about who the shooters are, you're urged to call the sheriff's office or Crime Stoppers.

Officials say a couple was gunned down after visiting a loved one who died at the hospital.