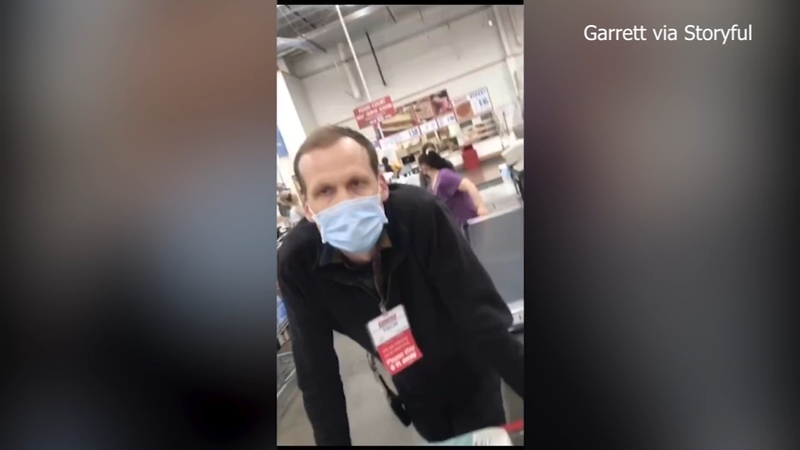 Costco customer gets kicked out of store for not wearing mask

THORNTON, Colorado (KTRK) -- A Costco employee refused to service a customer on May 16 after the customer refused to comply with the company's mask policy.

The video shows an altercation between Costco employee Tison, and Garrett, a customer. Garrett can be seen holding his camera phone up to Tison, saying, "I'll just put you on my 3,000-follower Instagram feed."

In response, Tison looked directly at the camera and said, "Hi everyone, I work for Costco and I'm asking this customer to put on a mask because that is our company policy."

Garrett was quick to respond.

"And I'm not doing it because I woke up in a free country," he said.

The Costco employee can then be seen grabbing the customer's cart and walking away with it.

Garrett also posted a selfie-style video to Reddit after the incident, which he later deleted, defending his decision to not wear a mask and referring to those who did as "sheep."

Garrett told Storyful that he has been isolating at home for the past two months and does not have COVID-19. He said that he believes requiring everyone to wear masks is unjust.

"We should be moving forward as a country," he said.

A Twitter user who identified himself as the Costco employee in the video said, "People of Twitter, thank you for all of the support. I was just trying to protect our employees and our members."
Report a correction or typo
Related topics:
societycoloradoface maskcostcotwitterinstagramgrocery store
Copyright © 2022 KTRK-TV. All Rights Reserved.
TOP STORIES
51-year-old on the run as suspect in corporal's ambush killing
Sergeant was to walk daughter down aisle until his hit-and-run death
Drying out but staying cool this week
Texas among states suing Google over claim it's misleading consumers
Man accused of stabbing K-9 in The Heights now charged
'We knew something big exploded': ABC13 recalls moment of Watson blast
2 adults killed and 12-year-old hurt in crash with speeding tow truck
Show More
Dad charged and fired from job after racist tirade posted on TikTok
Bad Bunny announces stadium tour stop at Minute Maid Park
Here are your headliners set to perform for the BBQ Contest at NRG
5 tax changes that can boost your refund this year
Getting paid on Venmo or Cash App? New tax rule might apply to you
More TOP STORIES News