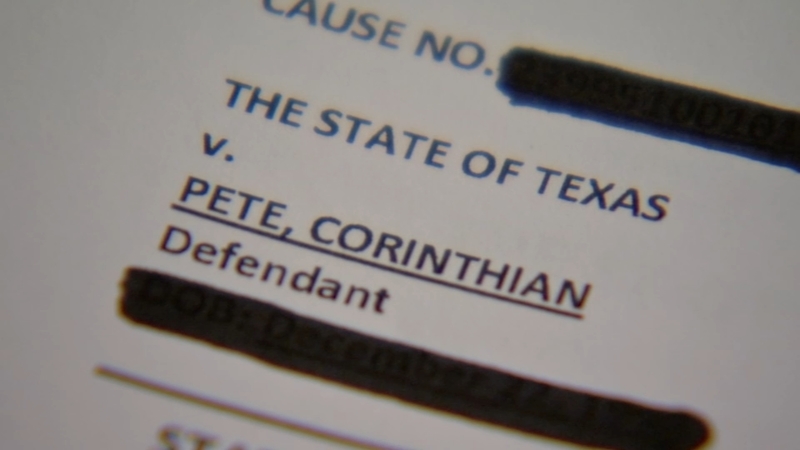 An alleged serial stalker arrested, charged with criminal trespass, mischief charges against ex from decade ago

Corinthian Pete is currently jailed on a $5,000 bond for vandalizing a couple's car.

Court documents say the 31-year-old was dating one of the men over a decade ago.

Pete currently has five misdemeanor charges against him for criminal trespass and criminal mischief in less than a week.

According to court documents, Pete attempted to contact the victim through social media a few weeks ago and when there was no response from the victim, he went to his home.

The victim, who is now married, says he and his husband are in fear for their lives.

"Two grown men, who are concerned for their safety and who have gone and bought guns over the weekend because Harris County criminal justice system with air quotes around criminal justice is not protecting them."

That's attorney Jolanda Jones' claim after her client had his car windows smashed at his home this week.

She says Corinthian Pete went to the victims' home unannounced.

Court records show Pete showed up at the couple's home Friday, March 18 and was banging on the door.

Jones says the police were called and Pete was arrested for criminal trespass.

The Harris County District Attorney requested bond, but Pete told the judge he was indigent and was too broke to pay.

Pete was released on a no-cash general order bond where it's not required to put down money to be released.

The following day, Pete returned to the couple's home and was arrested again for criminal trespassing.

The state asked for a $5,000 bond, but Pete was released again under the jail reform known as the O'Donnell Consent Decree.

This required the court to let the person go if they are too poor to pay their requested bond.

Court documents reveal that while in custody on March 20, Pete was charged twice with criminal mischief for kicking a police car and smashing a jail computer.

Documents show Pete was released from and returned to the couple's house for a third time on Wednesday, vandalizing their car and security cameras.

In the state's motion for bond hearings filed March 18, the state requested the defendant have no contact with the complainant, that the defendant submit to electric monitoring, and prohibits the defendant from leaving his residence without a GPS monitor. The DA's office says the motion was not signed.

The office tells ABC 13 by phone, "We have tremendous sympathy for the victims in this case. The filings speak for themselves. We are doing everything legally that we can do."

Corinthian Pete is currently in jail on a $5,000 bond.

He is scheduled for another bail review.